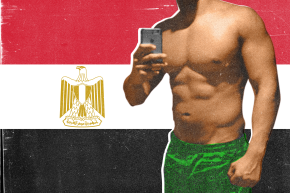 In a country where traditional norms around sex and marriage still prevail, a small group of young people are swiping right

Cairo, Egypt – When one graduate of Egypt’s prestigious American University of Cairo (AUC) recently became engaged, she told her parents in southern Egypt that she met her fiancée through mutual friends. The truth: they met after both swiping right on a dating app.

“For parents and stuff, I can never say Tinder,” said the twenty-five-year-old, who lives with female friends in an upscale neighborhood in the capital, Cairo. She requested anonymity because of the stigma against dating and sex outside of marriage in socially conservative Egypt.

Despite that stigma, in recent years Tinder and online dating websites like OkCupid have become increasingly popular among upper- and middle-class Egyptians looking to find anything from hookups and sex to dates to new acquaintances in Cairo, Egypt’s chaotic capital of over 20 million people.

For the far fewer Egyptian women than men on these sites, however, secrecy is also part of the game: Most women interviewed requested anonymity because they feared for their reputations if family, friends, or colleagues knew they dated or met partners online. And while in Egypt Tinder profiles advertising shirtless men with cars, police and military officers, and older men with rings on their fingers are standard, cases of swipes to the right turning to marriage remain rare.

“I get very angry because you’d swipe through and you’d see all these shirtless guys with their guns and cars,” said a 27-year-old Egyptian lawyer. “It’s everything I hate about [Egyptian] society condensed in an app.” She asked Vocativ not to use her name because she “manage[s] a lot of young boys at work.”

Still, after first trying out Tinder in Canada, she’s continued to use it in Cairo on-again off-again to expand her dating circle, with some successful romances along the way.

Traditionally in Egypt sexual relations outside of marriage are taboo — in fact, any dating that happens is generally short and geared towards getting engaged. Sexual health education, meanwhile, is practically non-existent, and nearly all Egyptian women have experienced sexual harassment. In 2014 Egypt’s top Islamic authority issued a religious ruling prohibiting the use of online dating. Grindr, a dating app for gay men, has warned users in Egypt that police may be posing as users to entrap them and arrest them using laws against debauchery, prostitution, and pornography.

But social mores aside, Egyptian youth are skilled at usurping the system. About half of the population is under 25 and more than a third is connected online. Many young Egyptians now have secret boy and girl friends through Facebook and Whatsapp. There remains a thriving underground queer community in Cairo, despite the dangers.

Open up Tinder or OkCupid in Cairo, and you’ll still only find a specific subset of the population: upper- and middle-class Egyptians who are not super religious and usually with varying knowledge of English. All Egyptian women interviewed using these sites had either lived or traveled abroad and in Cairo met up with both Egyptian and foreign (often Western) men. They also reported being flooded with matches and responses.

For the now-engaged AUC graduate, her foray into Tinder began in 2015, when she and two other AUC friends started using tinder together as “a support group” when they were bored. They would then go to dates at a popular hotel bar near their apartment.

“Some guy were nice and I’m still friends with,” she said. “Some guys were like all over you, which is not okay.”

She and her now fiancé casually dated, including sex, for about six months before they began formally dating and then got engaged after a year.

Another friend in the circle, however, felt less satisfied with her dates, casual sex, and few relationships through Tinder.

“I wasn’t really sure what I was trying to find on Tinder,” the twenty-five-year old said, requesting anonymity because her parents, who do not live in Cairo, do not know. “But whatever it was I didn’t find it.”

In Cairo, where about one-eighth of Egypt’s 90 million people live, conditions are relatively freer relationship-wise than in other parts of the country. At night young couples fill upscale cafes or line the iconic bridges alongside the Nile, holding hands and taking selfies.

At the same, the situation varies by class, according to Anthropology Professor Farha Ghannam at Swarthmore University. “The spaces available for upper and middle class Egyptians in relationships are very different than for low income young people,” who are the majority in Egypt, she told Vocativ. Prolonged engagements can serve as a dating-like get-to-know-you period as it provides legitimacy to the relationship (and can be called off), Ghannam said. In highly conservative and religious families and communities, dating — at least as it looks in the West — remains highly taboo.

Hookup apps in Egypt have also grown alongside socio-political and technological changes that have eroded and reinforced conservative gender and sexuality norms online and in real time. Internet and smartphone access have been steadily rising since the 2011 Egyptian revolution, which enabled new spaces to challenge social and gender standards, and the 2013 military coup, after which political activism of any kind has become increasingly restricted. All the while, the country’s economic problems have made it increasingly hard for young men to afford traditional rites of marriage.

Nehal, 31, a graduate from a public Egyptian university, who used only her first name for privacy reasons. was frustrated that she wanted to date but hadn’t found anyone through her social and family circles, as is most common in Egypt. So she turned to ICQ chat rooms, which she had first used for non-dating purposes as a teenager abroad, and then migrated to OkCupid and Tinder.

Nehal was veiled when she started online dating, though no longer is, and has a curfew, as many unmarried Egyptian women living with family do (unlike males). She was often frustrated that the men she met didn’t expect women like her to want to date and didn’t seem to know what to do or what they wanted.

“Many men still believe that they have to be in the mindset for dating for marriage,” Nehal said. “These are of course generalizations, but many feel like they can’t date someone and then decide they want to marry her. They don’t invest time and emotions towards building a relationship.”

Nehal repeatedly had men “ghost” on her after several days or weeks of intense online and real time flirting. “Dating [in the Western sense] isn’t really part of our culture,” she said.

She also didn’t tell many friends, as she wasn’t sure how they would react. While in ways liberating, she also found gendered social burdens still follow many Egyptian women onto dating apps and websites.

“Girls may judge or lecture each other more [than men] on honor, virginity, eib [shame], what’s allowed socially and not, and remind you what happens if someone sees you… because you can’t go to his apartment because that would mean you want to sleep with him, and of course you can’t sleep with him,” she said, explaining a mindset common among many Egyptians.

Of the women interviewed, some preferred Tinder because it more easily filters out unwanted communication, while others chose OkCupid because fewer friends were on it and it has a more commitment-oriented reputation. One woman who dates both men and women reported finding one woman seeking a woman on OkCupid, though no apps or websites are considered popular among lesbians in Cairo.

For those with money in Cairo, socio-religious restrictions are easier to bypass. Airbnb, for example, has become one way to sidestep Egyptian hotels, which generally require couples to be married. Like anywhere else, Tinder and OkCupid have also become sources for prostitution and adulatory. Women reported finding many males from Gulf countries, where dating apps are used more widely to bypass gender separations. Others came across men recently divorced from more traditional marriages, and one had female friends who turned to Tinder to date after a divorce.

As for the impact on Cairo’s “hook up” culture, women interviewed generally agreed that Tinder helped facilitate a trend that was happening anyway. And at the end of the day, scrolling through profiles and the unrequited online efforts by Egyptian men also often provided a most important thing: a good laugh.