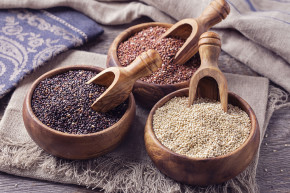 For the past few years, quinoa has been at the center of the health food movement. But the buzz is warranted — not only is the round little grain packed with fiber and lots of healthful, hard-to-find minerals like manganese and phosphorus, but it’s one of the hardiest crops out there, able to grow at high altitudes in thin soil with little water. Experts think quinoa could help feed some of the world’s most food-scarce communities, but it hasn’t gotten there yet, in part because of a bitter, hard-to-remove compound that coats the grain.

These bitter-tasting compounds, called saponins, help prevent pests from consuming quinoa, but they have to be removed by humans before eating the grain, which requires more resources and work. Much of the quinoa sold in the United States comes with the saponins already removed, usually through a tumbling process that removes the outer layer of the grain followed by washing it. But quinoa could expand to its full potential and feed the world, scientists predict, if only they could tweak its DNA a bit to make its taste more appealing without all this extra work.

Now a team of international researchers have taken the first step: They sequenced quinoa’s DNA, according to a study published Wednesday in Nature. Quinoa as we know it now probably evolved from a few different strains domesticated in the mountains and on the coast of South America, the researchers determined. They also identified the genes that create the saponins, which could be the first step in creating GMO quinoa plants that don’t produce these bitter compounds.

Understanding quinoa’s full genome can help researchers develop plants that are shorter, hardier, and sweeter, while still maintaining enough genetic diversity to avoid widespread disease. That could not only bring food to the people who need it most, but help give farmers a new source of income, as the farmers in Peru experienced.