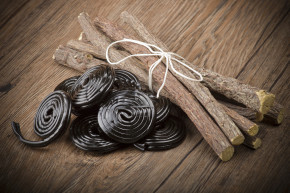 Pregnant Women: Stay Away From Licorice
By Alexandra Ossola

Pregnant Women: Stay Away From Licorice

Licorice might seem like a harmless treat. But for pregnant women, that doesn’t seem to be the case — the same chemical that makes licorice naturally sweet can also inhibit a fetus’s development, according to a new study.

Doctors have long advised pregnant women to avoid consuming too much of anything that contains licorice root because it contains a chemical called glycyrrhizin. In normal, healthy people, glycyrrhizin tastes bittersweet, can help soothe sore throats, and may even combat liver disease. But in pregnant women, the compound had been associated with low birth weight and slowed development. Researchers thought they understood why—in animal studies, too much glycyrrhizin can deplete the amount of an enzyme found on the placenta that protects the fetus from stress hormones in the mother’s body—but they couldn’t be sure.

In the study, published Friday in the American Journal of Epidemiology, a team of Finnish researchers followed 920 mothers who, when they gave birth in 1998, reported how much licorice they consumed. Doctors followed up with the 378 children 13 years later. A series of psychological and physical assessments found that the children whose mothers consumed high levels of licorice scored lower on cognition tests by an average of about seven points, especially in verbal productivity and memory. They were also three times as likely to have been diagnosed with ADHD; puberty had set in earlier among the girls in the group, which has been associated with increased likelihood for diseases like cancer later in life.

Though this study presents a strong association between licorice consumption and developmental issues, its design means that scientists can’t identify the exact cause of the issues. If the pregnant women reported their consumption correctly, glycyrrhizin might be the cause, but there also might have been other factors at play (such as the way the baby was delivered or environmental exposure to other kinds of chemicals). These findings support researchers’ earlier assumptions about the effect of licorice on developing fetuses, but they would need to conduct further studies to be certain. Plus, the researchers note, the limitations of the study mean there appears to be “no safe exposure”—that is, they don’t know how much licorice it takes for the negative effects to set in. Short of more information, it’s smart for pregnant women to avoid licorice altogether.