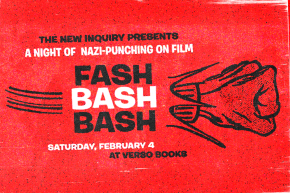 Heroic violence against Nazis is by no means a new trope in cinema (just ask Indiana Jones), and neither is the notion of “fash-bashing,” a term to describe tactics used to fight fascism. But when the celebration of this kind of onscreen violence takes place alongside the very real clashes between far-right supporters of President Donald Trump and anti-fascist demonstrators that recently occurred on college campuses and in the streets of D.C., a “fash-bash”-themed film festival becomes inherently controversial.

“Ultimately, it’s just a film screening,” said Ava Kofman, an editor of The New Inquiry, the non-profit literary magazine that hosted a Brooklyn film screening called “Fash Bash Bash” on Saturday. “There are lots of mainstream American classics and blockbusters [included]. It’s not itself a violent event.”

Roughly 150 people gathered to watch 12 fictional depictions of fash bashing, while drinking punch, fundraising, and mingling with likeminded people. The event was held at Verso Books, the “largest independent, radical publishing house in the English-speaking world.” According to Kofman, it was “by far the most packed event we’ve hosted.”

Organizers were extremely cautious in regard to the safety and security of attendees. At least three clearly-distinguished security guards were present at the building and venue entrance and prior to entry, the cameras on the phones of all attendees were covered with stickers. All means of audiovisual recording were prohibited. While these security measures are more extreme than at many public events, organizers described the measures as precautionary.

Event organizers served the punch (suggested donation: $5) out of a large storage container complete with a makeshift fountain that misted and dribbled the liquid out of a mask of Donald Trump’s face. Attendees sat on foldout chairs and on the floor, and others stood along the bookshelf-lined walls throughout the screenings. The room was filled to capacity.

The Fash Bash Bash was a smashing success. Thank you all! pic.twitter.com/p44bnuTimK

Before the screening began and in between clips, a looped GIF of white supremacist Richard Spencer, president of the so-called white nationalist think tank the National Policy Institute (NPI) and reported creator of the term “alt-right,” being punched in the face by an anti-Trump demonstrator on Inauguration Day was played on the giant projector screen.

This clip is likely the most widely-circulated example of modern, real-life fash-bashing out there. In the video, which quickly became a viral meme, a blow is delivered to Spencer’s face just as he is explaining the significance of a pin he is wearing that depicts Pepe, a cartoon frog character co-opted by the so-called alt-right and eventually embraced by Donald Trump. As the footage was repeatedly remixed and celebrated — even among members of the not-so-far left like Obama speechwriter Jon Favreau — several mainstream news outlets published articles and editorials debating the ethics of punching a Nazi, or anyone whose political views are heavily shaped by racism, xenophobia, and bigotry.

Naturally, many people (including some notable ethicists) maintain that it is not right to inflict violence on anyone for any reason other than self-defense. In an interview with VICE, ethicist and former New York Times columnist Randy Cohen maintained that the act is “morally wrong.” Perhaps worse, Nitzan Lebovic, the chair on Holocaust Studies and Ethical Values at Lehigh University, also suggested that such tactics “play right into the hands of the regime” and have served as an excuse for governments to enact more punitive measures against dissidents in other countries.

But judging by the reactions to the short clips from foreign films, B-list flicks, and Hollywood Blockbusters, there seemed to be a consensus among the room that Nazi punching was endorsed, or at least accepted.

“They deserve it,” said Daryle Jenkins, executive director of One People’s Project, an anti-racist organization, when asked why he thought the Nazi-punching meme was appealing to such a large and diverse number of people.

For the first clip of the night, Jenkins presented a scene from “American History X” in which a reforming Nazi beats up the older white supremacist that once groomed him. The 48-year-old has been following hate groups of what he terms the “racist right” for decades. He watched Spencer rise to prominence within NPI, and observed as far-right conservatives discussed their support of Donald Trump before he announced his campaign.

“I’ll always tell people don’t engage [physically]…unless you’re defending yourself,” Jenkins said. “That’s supposed to be the regular. But having said that, I’m not shedding any tears for Nazis that get smacked around. Especially when those Nazis wish death on all of us, I’m not doing that.”

On the grounds of free speech, Spencer, who has denied that he is a neo-Nazi but openly believes in white superiority, has used his platform to publish content with titles like “Is Black Genocide Right?”

Jenkins said he had sold about 150 Antifa hats to raise money for the J20 Legal Support Fund on Saturday night. That fund aims to help cover the legal costs of those arrested protesting in D.C. on Inauguration Day. Over 200 people were arrested after protestors began lighting public property on fire and damaging corporate chains, and some were charged with counts of felony rioting. (Among them was Evan Engel, a Vocativ journalist covering the demonstrations. The Committee to Protect Journalists deemed the charges against him and other journalists inappropriate. Charges against Engel were dropped the following week.)

Many of Saturday’s attendees were seemingly aligned with Antifa, a global antifascist resistance movement based in anarchist politics that seeks to confront fascism directly and by any means necessary, including illegal acts like property damage and violence against those deemed fascists. A common belief within the movement is that violence against fascists, while not necessarily a moral good, is often the most appropriate means of fighting back. Individuals speaking on antifa’s behalf have said that it is only language fascists understand, and that petitions, calls to one’s government representatives, and peaceful protests have both historically and recently proven ineffective.

When antifascist protestors in Seattle gathered to demonstrate against a scheduled speech by Breitbart editor/hate monger Milo Yiannopoulos, a Trump supporter shot one in the stomach. Other scheduled speeches by him and similarly-minded and recently popular Trump supporters like right-wing misogynist and internet provocateur Gavin McInnis have also been marked by skirmishes as the two sides clash. The “alt-right” and other organized groups of anti-immigrant, anti-Muslim, anti-Semitic, and anti-LGBTQ persons formed online and gained a national platform throughout the course of Trump’s campaign, and the views they have espoused have been mirrored in recent outbreaks of hate crimes and threats. Since the election, the resistance movement intent on stopping them has experienced a similar surge.

Several of those who presented — writers, editors, academics, and activists — commented on the crowd size.

“I didn’t realize that it was going to be as big as it was. I’m not used to that,” Jenkins told Vocativ, describing most gatherings in the past as being a simple affairs among friends. “I was just amazed by it. I think we’re going to be seeing a lot more. The momentum is on our side.”

By “more,” Jenkins means more activist organizing. Sure, a large part of the event really did center around the shared experience of watching Nazi characters attacked. But many clip presenters brought up the necessity of organizing. That, they stressed, was what would make this night not just enjoyable but also meaningful.

Kyle, a 29 year-old working within the architecture field, who attended the soiree was unaware of the hosts’ larger political message until the morning after he attended, but he was familiar with the “Nazi punching” meme. Kyle requested Vocativ not use his full name.

While Kyle says that watching the Spencer video made him feel glee, he left still unconvinced that violence is the best solution in fighting members of the far right and found aspects of the event “a little self-indulgent.” He believes that education and discourse may be a less risky and more effective way of stopping members of far-right hate groups. Though he laughed throughout the course of the night, he said that there were particularly gruesome scenes that made him feel uneasy to watch.

“[Violence] is not necessarily going to help,” he said. “But it is going to corrode the position of decency in this country and lead to an escalation of tyranny on both sides of the coin, where everyone has blood on their hands. We have to be willing to live with the consequences of how we respond. It’s a dangerous time. Shit’s real.”