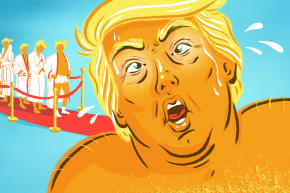 “He will be selected by popular vote — not the electoral college,” said spokesperson Alex Hawkins. “Themes for these scenes will be inspired by the news cycle, tweets from the man himself, and the limits of our imaginations.”

Three months later, after what a publicist called “many” submissions, they have narrowed it to three finalists — a trio of young men equipped with orange hair and average or below-average impressions of Trump (or, probably more accurately, Alec Baldwin imitating Trump). One of the finalists’ videos lasts for all of 10 seconds and cuts out abruptly — and he’s currently leading in votes — so one can only imagine what the other tapes were like. But a publicist, who declined to give an estimate, said there was no shortage of submissions.

The bigger practical questions here are: Who the hell wants to watch Donald Trump have sex? And will anyone be able to laugh, let alone get a boner, amid the xenophobia and constitutional trespasses that have thus far set the tone of the Trump administration? To the latter question, Hawkins seems to think it’s possible. “Political satire has been part of the American ethos since before the revolution,” he said. “Where our motive is not to advance a political agenda, we do hope to entertain and excite our viewers.”