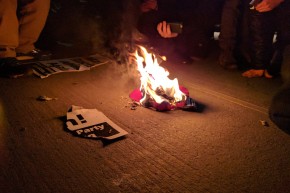 UPDATE: 1:43 PM, The article has been updated to include a statement from an NYU spokesperson

Almost a dozen people were arrested and scuffles took place at New York University on Thursday night, as a large crowd of anti-fascist protesters confronted police and white supremacists outside a short-lived event featuring a prominent member of the neo-fascist “alt-right” movement.

The event, hosted by NYU’s College Republicans, played host to Gavin McInnis, an ousted co-founder of Vice Media and leader of the “Proud Boys,” a misogynist clique of internet trolls aligned with the racist identity movement known as the “alt-right.” The speech was cut short amid continued interruptions from protesters, who snuck into the event while dozens more confronted police and McInnis’ supporters outside.

McInnis is known for racist and misogynist rhetoric calling for the targeted harassment of marginalized groups. Among other things, he has compared black actress Jada Pinkett Smith to a “monkey,” suggested that Jewish people were “ostracized for a good reason,” and wrote an article titled “Transphobia Is Perfectly Natural,” which attempts to rationalize a false stereotype that transgender people suffer from “untreated mental disorders.”

McInnis was pepper-sprayed by one of the protesters while entering NYU’s Kimmel Center, as the group outside blocked the sidewalk chanting “Fuck White Supremacy” and “FTP, Fuck The Police.” Shortly after, masked protesters set fire to a “Make America Great Again” hat that was snatched from one of McInnis’ supporters during a brief scuffle. Police rushed into the crowd to extinguish the flames, then unexpectedly charged into the group, grabbing and pinning protesters to the ground as the rest dispersed around the building toward a side entrance.

McInnis’ speech lasted less than 15 minutes before he began lashing out at NYU administrators amid constant interruptions from protesters, several people who were present told Vocativ. A student reporter for NYU Local said that McInnis called an NYU spokesperson a “dumb, liberal asshole” and left after the staff refused to eject the protesters.

“He held the floor for some 20 mins, although he was interrupted repeatedly,” said NYU spokesman John Beckman, in a statement emailed to Vocativ. “The decision to end the event when he did was his own.”

Beckman noted that there was no violence or arrests inside the Kimmel Center, where only students with IDs were admitted. He also claimed that the crowds of protesters outside “were largely composed of non-NYU protesters.”

In a tense stand-off, a small group of McInnis supporters stood near the side entrance arguing with and taunting protesters while under the protection of a large contingent of police. One of the Proud Boys, later identified as Salvador Cipolla, crossed the street and attacked a reporter from DNAinfo, aggressively posturing and yanking at the reporter’s press badge before being arrested by the NYPD. Another Proud Boy wearing a MAGA hat was splashed in the face with water while giving an interview to an NYU student reporter.

Many of the protesters were aligned with the anti-fascist resistance movement, or Antifa, which seeks to combat rising fascism and bigotry by directly (and sometimes violently) confronting its adherents. The movement has seen a major resurgence of activity following the rise of racist far-right groups newly emboldened by the election of Donald Trump, who has embraced racist and anti-immigrant policies during his campaign and in his two weeks as president.

The protest against McInnis comes just one day after another protest at the University of California Berkeley shut down a speech from former Breitbart editor Milo Yiannopoulos, another prominent “alt-right” leader. Yiannopoulos has been banned from Twitter and recently encouraged the harassment of a transgender student during a speech at the University of Wisconsin-Milwaukee.