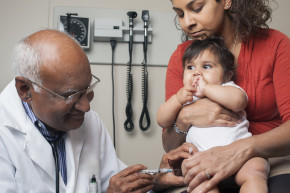 Foreign Doctors Just As Good As (Or Better Than) American Ones

Patients whose doctors graduated from medical schools abroad had lower death rates than those whose doctors were taught in the U.S.

While bias against doctors educated outside the U.S. has been well-documented, a new large-scale study shows that xenophobia may be the only thing backing such beliefs.

“We knew that there was a bias towards foreign medical graduates from both colleagues and patients,” researcher Yusuke Tsugawa told Vocativ. “There is concern that the qualitative medical care of these graduates might be worse than U.S. graduates without any evidence.”

To the contrary, Tsugawa and his colleagues found that foreign-educated doctors who now work in the U.S. may be even better at treating patients than those schooled within the country. Their new study, published in the medical journal BMJ, analyzes a sample of over 1.2 million Medicare beneficiaries aged 65 or older who were admitted to U.S. hospitals between 2011 and 2014 and treated by general internists. After accounting for other relevant factors, the researchers found that those treated by international medical school graduates had a slightly lower risk of mortality than those treated by doctors educated in the U.S. (11.2 percent compared to 11.6 percent, respectively). This was true despite the fact that international doctors treated patients with chronic conditions at a higher rate.

Though the difference is slight, the researchers calculated that for every 250 patients treated by medical grads education within the U.S., one life would be saved if the quality of treatment for both groups was equal. Other outcomes analyzed within this study, like readmission rates and costs of care, also showed only minimal difference between the two groups of doctors.

More What Patients Look For In A Doctor, According To Yelp

Though prejudice has led people to think otherwise, the findings are actually pretty unsurprising considering how rigorous and selective the process by which foreign-trained doctors earn the right to practice in the U.S. is — experts say the standards are unmatched anywhere else in the world. And their role is crucial, as the need for physicians within the U.S. will soon outpace the demand. At present, roughly one in four doctors practicing in the U.S. were trained abroad (including American citizens who traveled abroad to receive their medical training), and the majority of U.S. doctors from overseas come from India, Pakistan, and the Philippines, as the study notes.

Now, worries have arisen that President Trump’s ban of citizens from seven majority-Muslim countries will result in a chilling effect and have an adverse effect on the medical field for this very reason.

“Putting a ban on these seven countries will be a sign for the medical trainees thinking of coming to the U.S. that the U.S. is not as open as before, so it might have an impact,” Tsugawa said. “They could decide to go elsewhere, like Europe or Canada to practice medicine.”

Given the implications of his study, this also means that Americans could risk losing out on medical professionals capable of providing high-quality care.