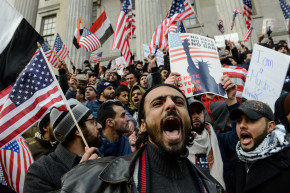 Over 1,000 Yemeni-Owned Stores Close In Protest Of Trump
By Ethan Harfenist

Over 1,000 Yemeni-Owned Stores Close In Protest Of Trump

People participate in a Yemeni protest against Trump's travel ban in Brooklyn — REUTERS
By Ethan Harfenist
Feb 02, 2017 at 3:35 PM ET

Yemeni-owned bodegas and grocery stores across New York City’s five boroughs locked their doors on Thursday to protest the Trump administration’s recent “Muslim ban.” Yemen is one of the seven Muslim-majority countries included in the executive order, issued last Friday, and the coordinated shutdown is meant to highlight the role Yemeni business owners play in their communities while bringing attention to the travel restrictions.

A thousand stores, some of which are typically opened 24-hours, are shutting down from 12 p.m. to 8 p.m., according to organizers. Members of the Yemeni-American community plan to hold a rally later in the day at Brooklyn’s Borough Hall. The original plan was to start the strike at 8 a.m., but some shop owners refused to leave their customers hanging, according to Debbie Almontaser, one of the organizers.

“Even when their lives have been turned upside down, they refused to disrupt the lives of the very people they serve daily,” said Almontaser, who was quoted in a press release on the event’s Facebook page.

Almontaser told Vocativ that the idea for the bodega strike came about on Sunday, two days after Trump signed the executive order that led to chaos and protests at airports across the country. It took four days of organizing to pull off the highly-coordinated event.

“[Someone] said that we have to do something to represent and show the vital role we play in the American economy and how we are good citizens that serve our communities,” Almontaser told Vocativ. “I think it’s pretty incredible we’ve been able to do this in four days.”

Other Yemeni-owned businesses, such as cell phone shops and restaurants, are also closing on Thursday. “There has been a report of a small number of other ethnic groups closing,” she said.

An independent organizer created a GoFundMe page to recoup the financial losses incurred by the strike. The fundraiser’s creator, Catherine Keys, says she’s connecting with the event organizers in order to make sure all the money raised goes to the right place.

“Donating what we would otherwise spend at our local bodega on a regular Thursday to give back to this community is the least we can do to show solidarity at this difficult time!” Keys wrote on the campaign page. Almontaser said she is aware of the fundraising campaign and is “so appreciative” of the effort.

Nabil Ahmed Aljomai, an owner of three shops in the Longwood area of the Bronx, said he’s closing all of his stores as an act of solidarity with his fellow bodega-owners.

“We want to send a message that we can stay and be free in this country,” Aljomai told Vocativ over the phone. “America believes in freedom and rejects racism, and that decision Trump made is kind of racist.”

Aljomai is an American citizen of Yemeni descent. Though he was born in Yemen, he said his eight kids know only what he tells them about their ancestral homeland. Aljomai said a few members of his extended family have felt the heat of Trump’s executive action: His cousin is stuck in Egypt because he holds a green card and is awaiting legal counsel on how to best get back to the United States.

This situation, Aljomai says, is much more vital to him than making money for the day. “If [Trump] can do this in 10 days, the four years that are coming are going to be worse.”