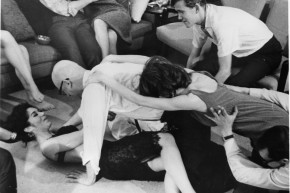 Update: The Virginia House passed the resolution on Thursday. Now it will go to the Senate.

Anti-porn legislation is all the rage these days, what with Utah calling adult content a “public health crisis” and several states considering mandatory content blocks on X-rated material. But Virginia has found a way to really stand out from the pearl-clutching pack with a resolution that not only calls pornography harmful and toxic, but also links it to an increased risk of — heavens, please cover your eyes — having group sex.

It is unclear where the resolution’s authors found that porn-orgy link. The sponsor, Del. Bob Marshall, did not respond to a request for comment by press time. Several leading sex researchers who study pornography told Vocativ that they are unaware of any peer-reviewed, longitudinal, or experimental studies suggesting anything of the sort. That said, it’s not unreasonable to think that such a connection might exist. “The correlational data consistently finds that pornography use is often positively correlated with personal variables such as sexual sensation-seeking, openness to experience, sexual orientation, and libido,” said David Ley, a clinical psychologist and author of the book, “Ethical Porn for Dicks: A Man’s Guide to Responsible Viewing Pleasure.” “Those same variables are likely to also predict involvement in group sex.”