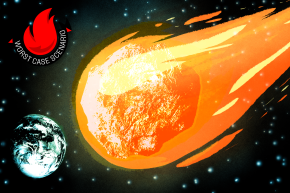 How NASA Plays The Odds With Asteroids That Could Kill Us

The chances of a major impact might be next to zero...but that still isn't zero

More than 100 years ago, on June 30, 1908, a mid-air explosion rocked the Siberian wilderness near the Stony Tunguska River, leveling about 800 square miles of forest — the size of New York City and Los Angeles combined — in an instant. The remote location meant there were no known human casualties. But what if the asteroid or comet that caused the Tunguska event was just seven or eight hours late in its journey toward Earth? That could have put it in the path of several major cities including Saint Petersburg, Helsinki, and Oslo — or left it to explode harmlessly above the icy ocean, potentially with nobody even noticing at all.

The Tunguska object, which exploded with a force roughly 1,000-times greater than the Hiroshima atomic bomb, captures the essential paradox in thinking about devastating asteroid impacts from outer space. The problem is asteroid impacts big enough to cause damage on that sort of scale are astonishingly rare, on the order of one every several hundred or even several thousand years. Indeed, there are no confirmed asteroid-related deaths in recorded human history, though there might have been one dog in Egypt. So are asteroids really a threat, or are they not worth worrying about?

Scientists have decided it’s worth worrying, but just a little. “Asteroid impacts are very unlikely events, especially the large ones, but they are preventable if we find these objects with sufficient warning,” Paul Chodas, manager of the Near-Earth Object office at NASA’s Jet Propulsion Laboratory, told Vocativ. Compared with, say, earthquakes or volcanic eruptions, it’s that predictability that makes asteroid impacts unique. “We can do something about this hazard. Many other hazards are more random and you can’t.”

NASA’s Kelly Fast, a scientist at the recently formed Planetary Defense Coordination Office, approaches it with a similar attitude: “You don’t know if you don’t look.” That’s why NASA’s primary focus is on finding as many potentially hazardous “near-earth objects” as possible. The Planetary Defense team is on the lookout for any possibly dangerous objects more than about 50 meters wide (the Tunguska object was probably about 40 to 50 meters wide). NASA’s Near-Earth Object office takes a still broader view, as a 2005 law calls for them to locate and catalog potentially devastating asteroids more than 140 meters across.

The problem, to some extent, it that we’re running up against the limits of our current telescopes in searching for such faint objects. Of 140-meter asteroids, there are probably roughly 25,000 in Earth’s general vicinity, but we’ve only located about 25 to 30 percent of them, far short of the 90 percent goal Congress had set. In theory, the agency is meant to hit that mark by 2020, but there’s next to no chance of that happening, in part because of technological limits. The next generation of ground- and space-based telescopes, such as the NEOCam, have the potential to reveal many more of those 140-meter objects, but these are still years away from coming online.

But asteroids smaller than 140 meters, smaller even than the 40-meter Tunguska object, can still make a splash: Just ask the Russian city of Chelyabinsk, above which a meteor exploded on February 15, 2013. This object was considerably smaller than Tunguska, measuring about 20 meters wide. The explosion created an air blast that released about 33 times the energy of the Hiroshima bomb, though the effect on the ground wasn’t as severe as that might suggest. About 1,500 people suffered injuries, mostly from windows shattered by the blast wave.

“In our engineered world, it doesn’t take a very large object to cause some damage,” Victoria Friedensen of NASA’s Planetary Defense told Vocativ. Indeed, this was a frightening experience for the residents of Chelyabinsk, made worse because it came with no advance warning. The meteor approached from a sunward direction, making it invisible to ground-based telescopes before it entered the atmosphere.

Surprises like that aren’t uncommon for such relatively small objects, but they are considerably less likely for asteroids that could cause devastation on a much larger scale. Before NASA’s current task of finding all the 140-meter asteroids, the Spaceguard Project in the 1990s called for the agency to find 90 percent of the one-kilometer near-Earth objects — a goal taken far more seriously after the comet Shoemaker-Levy 9 impacted Jupiter in 1994, releasing energy equivalent to 600 times the world’s nuclear arsenal. NASA has completed this task, finding about 950 kilometer-long objects. Though there are still some unaccounted for, there’s no real risk an object that big could sneak up on Earth unannounced like Chelyabinsk did — we would likely have decades’ worth of warning before collision. That means there would be time to do something about it.

“The more lead time you have, if you had years to plan, you would only have to deflect an object by a small amount for it to miss Earth years down the road,” said Friedensen. One possibility would be to hit the asteroid with a fast-moving object, deflecting it off course like a game of cosmic billiards. “Another technique is the gravity tractor technique, where you would put a mass close to an asteroid and hover there, and it would tug it.”

Both those options would require a lot of warning, likely at least more than 10 years. And while that’s not impossible — NASA is tracking asteroids that have less than a one percent chance of hitting Earth in the late 22nd century — a more immediate threat might require a solution that sounds like something out of “Armageddon.” Or at least a more scientifically accurate version of it.

“Nuclear is on the table,” said Chodas. “We could potentially explode a nuclear missile near the surface of the asteroid, which would vaporize part of the asteroid, and the material that comes off the asteroid actually pushes it and changes its trajectory ever so slightly.”

But what if an impact did prove unavoidable? As unlikely as that is — and Chodas pointed out the chances of an asteroid hitting a populated area is still more improbable — there would probably be time to evacuate a city or small region before the impact, though the infrastructure and economic damage could be enormous. And keep in mind that, while we use the term “impact,” that doesn’t necessarily mean the asteroid would reach the ground intact. Neither the Tunguska nor Chelyabinsk objects were big enough to hit the ground, and Chodas said it’s an open question whether a 140-meter object could make it through the atmosphere without burning up. In those cases, the devastation comes not from the collision with the ground but from the blast created by the mid-air explosion.

It’s only the much, much bigger asteroids where the real danger of global catastrophe begins. Most famously, the object that wiped out the dinosaurs was likely about 10 kilometers across. There are at most a handful of these objects, all of which we know about, and the fact that the last one hit Earth 66 million years ago gives a sense of their rarity. Asteroids at least a kilometer wide are more common, and while they might not wipe out humanity, they could kick up enough ash and debris to change the planet’s climate for months.

But the odds of any of that happening in our lifetimes are, if not nil, then the nearest thing to it. Asteroids remain more a topic for scientific investigation than active threat preparation, though many of NASA’s research efforts feature a little of both.

“The nice thing about the nearest objects and potentially hazardous objects is they come to us,” said Fast. “We don’t have to go them.” The agency is developing missions that will test both the kinetic impactor and gravity tractor techniques, while the recently launched Osiris-Rex mission will rendezvous with the asteroid Bennu in 2023, which among other things will allow scientists to better calculate its orbit and determine the true (and likely non-existent) odds of it hitting Earth in the late 2100s.

“Yes, the Earth is a very small target on the scale of the solar system,” said Chodas. “But it’s a very important to us, so that’s why we need to keep calculating the orbits to the greatest precision possible.”