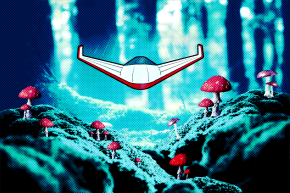 Defense Department’s Disappearing Drone Will Be Made Of Mushrooms

The Pentagon is close to developing flying robots that self-destruct

Soon, President Donald Trump may be able to deploy military drones that disappear without a trace. And those drones could be made out of fungus.

The United States Department of Defense (DoD) has been working on disappearing technology for at least four years. In 2013, the Defense Advanced Research Project Agency (DARPA) launched the VAPR (Vanishing Programmable Resources) program, with the goal of developing “transient electronics” that could self-destruct. With such technology, the DoD hope they can avoid handing secrets and U.S. defense tech over to enemies. Two years later, researchers demonstrated early VAPR technology at a DARPA conference, showing a microchip shatter into dust when triggered by a laser.

Days later, in October 2015, the organization announced they were expanding on the VAPR program with the ICARUS (Inbound, Controlled, Air-Releasable, Unrecoverable Systems) program, focused on developing cheap drones that could disappear after delivering supplies. “With the progress made in VAPR, it became plausible to imagine building larger, more robust structures using these materials for an even wider array of applications. And that led to the question, ‘What sorts of things would be even more useful if they disappeared right after we used them?’” VAPR and ICARUS program manager Troy Olsson said in a statement at the time “In discussions with colleagues, we were able to identify a capability gap that we decided was worth trying to close.”

Most DoD statements about ICARUS drones suggest the technology could be used to deliver things like medical supplies. Of course, it’s not much of a challenge to modify the same device to carry a weapon or explosive.

In January, one of the ICARUS-funded development companies, Otherlab, revealed their early drone prototype. The craft is a cardboard glider with internal sensors and a computer that adjust the wings or rudder. The rustic-looking robot has no motor, so it must be dropped from a plane or motorized drone. But once it’s soaring, the device can autonomously guide itself to a specific locations. A video of the drone in action, released on January 31, shows the glider being dropped by an octopcopter drone and seemingly guiding itself.

According Air & Space Magazine, Otherlab built the prototype out of cardboard because it is similar to the material they plan on using in the final product — mycelium, a mushroom-based material. The fungus can be modified so it eats itself quickly. “Our preliminary work on that indicated that you can basically impregnate [mycelium] with different types of spores [which] are activated just before the vehicle is released,” Star Simpson, an Otherlab engineer, told Air & Space.

The mycelium Otherlab plans on using would allow the drone to decompose in about five days. The current size can carry about a 2-pound payload, but by expanding the wingspan to 8 feet, the drone could carry about 22 pounds. That’s quite a load to be able to deliver without a trace.