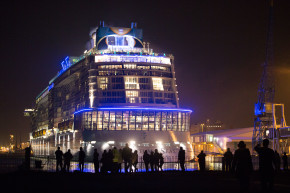 “Cruise Arabia,” a Dubai-based online cruise magazine for the Middle East and South Africa, is offering travelers an option to skirt the so-called “Muslim ban,” an executive order signed by President Donald Trump to prohibit travelers from Iran, Iraq, Sudan, Libya, Yemen, Syria, and Somalia from entering the U.S.

For the one million residents of the United Arab Emirates who are affected by this law, Cruise Arabia has come up with a “symbolic opportunity to visit a floating island of American culture without actually having to leave the Middle East, or indeed the Arabian Gulf.”

Their list “ranked in order of ‘Americaness'” includes trips from recognizable cruise lines like Norwegian and Royal Caribbean, and depart from Dubai to countries like Italy, Greece, Singapore, and South Africa.

The list will come in handy for travelers who are looking for an alternative to docking in the U.S. Over the weekend, Iranian chemical engineer and a green card holder Maysam Sodagari was detained for three hours by U.S. custom officials at Port Everglades in Florida upon his return from a gay cruise to Mexico, the Miami Herald reported. “In one night my status changed, from a legal person to a kind of illegal,” Sodagari said.

Several other guests from Iran and Iraq who hold green cards were also detained in Fort Lauderdale once their cruise ship docked, according to maritime lawyer James Walker, who wrote about Trump’s executive order on Sunday. The uncertainty about the law has created chaos and confusion particularly for cruise staff, many of whom are from predominantly Muslim countries, though it’s not clear if any of them are from Trump’s list of banned countries.

“I’m telling people who are coming on transit visas that they should expect trouble, simply from the perspective of what happened this weekend down at Fort Lauderdale,” Walker told Vocativ.