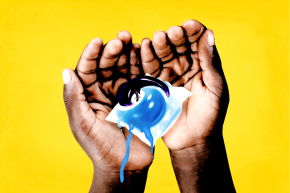 The number of injuries increased 32-fold in three years

Dissolvable laundry pods look pretty and are easy to use, which explains why more Americans are turning to them instead of liquid detergent. But it appears their size and colorful packaging can sometimes make them look a little too appealing to small kids. According to a new study, the number of pod-associated chemical burns in the eyes of preschool-aged children was 32 times higher in 2015 than it was in 2012, when laundry pods first hit shelves.

Laundry pods now account for 15 percent of the detergent market. Since their introduction five years ago, the risks they potentially pose to children have become clear: A 2014 study found that more than 17,000 kids had been hospitalized in 2012 and 2013. Most of them had ingested the pods, resulting in coma, respiratory or cardiac arrest, and even one death.

For this study, the researchers looked at nationwide data on consumer reports of chemical burns and eye infections that had been caused by detergent pods among three- and four-year-olds. In 2012, there were 12 such cases reported of chemical burns from laundry pods. In 2015, there were 480. The researchers are unable to track these particular patients to see the long-term effects of the burns, but chemical burns in the eye can at best cause temporary damage that goes away and at worst cause permanent vision problems or even blindness.

“These injuries most often occurred when children were handling the pods and the contents squirted into one or both of their eyes,” the researchers write in the paper, “or when the pod contents leaked onto their hands and a burn resulted from subsequent hand-eye contact.”

To prevent further injury, the researchers suggest parents take special care in how they store the pods in the home. They also suggest manufacturers could change the pods’ appearance to make them less attractive and more durable so that they don’t burst as often.

Some policymakers agree that manufacturers have to be held to higher standards. In 2015, Rep. Jackie Spier of California introduced a bill known as the “Detergent Poisoning And Child Safety Act of 2015,” which would require companies to change the packaging of laundry pods to make them safer for children. The bill has not yet come to a vote.