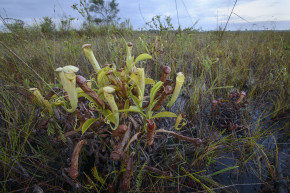 How Carnivorous Plants Evolved To Eat Animals
By Alexandra Ossola

The design of the pitcher plant is pretty ingenious. It entices its prey through colorful markings and a bulbous cavity filled with a fragrant nectar. The lip of the cavity is slippery so that insects and other critters are unable to escape once they fall in. Consuming this prey lets the plant absorb nutrients that are hard to come across in its poor soil.

There are hundreds of species of pitcher plants all over the world. Many of these plants seem to have evolved their carnivorous ways independently of one another, prompting questions among scientists about how plants came to feed on animals in the first place. Now a team of American and Chinese researchers have sequenced the genome of a particular species and gained a better understanding how this repeated evolution might have occurred.

Scientists have suspected that the pitcher part of the plant evolved from ordinary leaves. To test this, the researchers turned their attention to the species Cephalotus follicularis. Native to Australia, the plant has both pitchers and non-carnivorous leaves. Their goal, through sequencing DNA, was to figure out which genes allowed the plant to grow each of these structures simultaneously. They also compared the proteins found in the plant’s digestive fluids with those found in three other carnivorous plants that are all believed to have different ancestors.

The researchers found that the genes that originally helped the Australian plant respond to stress and disease had evolved to work as digestive enzymes. This appears to be more or less the same path that other pitcher plants took, and the researchers think the common factor driving this similar evolution was living in harsh, nutrient-poor environments. Unable to get food from the ground, plants all over the world turned to eating insects and other prey.

This is the most recent in a series of studies that shed light on the genomics behind convergent evolution, which happens when unrelated species evolve similar traits independently from one another.  One from 2011 uncovered the genes behind a distinct pattern in the wings of distantly related species of butterflies. Another from 2008 showed how both platypuses and reptiles both evolved to produce venom. More sophisticated genetic analysis, plus continued discovery of new and strange species, ensures that researchers will have no shortage of evolutionary mysteries to investigate, far beyond carnivorous plants.