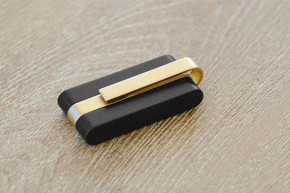 With Apple removing the 3.5 mm audio jack from the iPhone, and Samsung reportedly to follow suit with their upcoming Galaxy S8, consumers will be left with no choice but to buy a new, expensive pair of wireless headphones — or carry around an adapter to convert between the old-school 3.5 mm audio plug on their headphones and their new device. However, there’s a third solution, which might be the best yet: Bluetooth adapters.

Bluetooth adapters have been around for a while, but this technology might start seeing a rise in popularity since these adapters can make any pair of headphones or speaker wireless. One specific device that’s been making waves is Podo Labs’ Jack, which launched on Kickstarter this month and was fully funded in only three hours.

The Jack stands out from the rest not only because it costs $25 for early bird backers (it’s expected to retail for $40) but because it’s thin, portable and can sync to another Jack so two people can listen to the same audio. It also lasts 12 hours on a single charge.

“While the story to follow in 2017 is ‘Will my new phone have a headphone jack?’, Jack keeps your current headphones relevant so you don’t have to rush out and buy a new pair,” Eddie Lee, co-founder of Podo Labs, told Vocativ in an email.

Buying a new pair of wireless headphones can be quite pricey. The cheapest with good audio quality can cost $150 – $160 (Jaybird or AirPods) and could go up to $350 (Bose’s QC35). So it’s cheaper to just buy an adapter and keep your wired Beats or Bose headphones.

Podo’s Jack is not the only Bluetooth adapter in the market that’s cheap and good. Griffin, Mpow and TaoTronics also have good adapters that cost lest than $20 — but these devices don’t offer friend headphone syncing.

Wireless headphones sales have been increasing, but until these devices become the norm, Bluetooth adapters will be as essential to our lives as cassette player adapters were in the early era of the iPod.