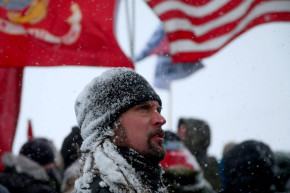 More than 35,000 dollars was raised in four days amid fears of renewed construction at Standing Rock

A Marine veteran demonstrates against the Dakota Access pipeline — REUTERS
By Jacob Steinblatt
Feb 01, 2017 at 5:43 AM ET

Veterans Stand for Standing Rock, a veterans organization dedicated to halting the construction of the Dakota Access Pipeline (DAPL) in North Dakota, has raised more than 35,000 dollars in four days towards supplies, travel, and the maintenance of a state of mobilization readiness.

Veterans Stand say around 4,000 veterans went to the protest camp Standing Rock in December in support of the protesters, and to protect them from police violence if necessary. The group launched its new fundraiser in response to President Trump’s executive orders to restart the stalled Dakota Access and Keystone XL oil pipelines.

Trump signed the orders on January 24, but reports on January 31 that acting Secretary of the Army Robert Speer ordered the Army Corp of Engineers to issue an easement necessary to complete construction of the DAPL has heightened the protesters’ sense of urgency. The Veterans Stand fundraiser published an update on Tuesday evening saying the new order “could mean that we need to move up and modify the operational plans for our mission.”

Around 750 people have already donated to the cause, slated to fund critical supplies including firewood, food, and medical supplies, as well as a ride-share program and cash on hand for the mobilization of thousands of veterans.

The Standing Rock Sioux Chairman, Dave Archambault, vowed on Tuesday to go to court in order to halt the army’s easement. The tribe claims that construction of the pipeline could pollute the local water source, potentially tainting drinking water for thousands.