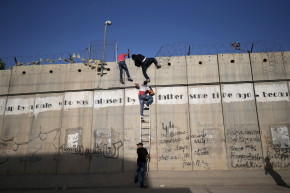 Trump points to Israel as a model for his border wall, but ignores reality

Building a wall on the U.S.-Mexico border was one of the pillars of Donald Trump’s presidential campaign, and he has vowed to make good on that promise despite a staggering estimated $21.6 billion price tag and other major logistical issues. But there is a much bigger flaw in Trump’s plan: Walls don’t work.

There are nearly 50 border walls and fences in existence worldwide today, and all evidence suggests that they are merely a temporary fix to the illicit movement of people and things. Border walls may be convenient backdrops for political leaders trying to prove their dedication to national security, but they tend to be ineffective at best and dangerous at worst.

Nowhere is that lesson more blatantly on display than in Israel, a country surrounded by walls and fences to which Trump has repeatedly referred as a model for the United States.

“Separation has made it easier for Israelis and Palestinians to demonize each other.” —Danny Tirza

The tweet spurred domestic and international backlash, including from Mexico, which expressed “profound surprise, rejection and disappointment” in a statement by the Mexican foreign ministry. Charged with damage control, Israeli President Reuven Rivlin called Mexican president Enrique Peña Nieto to say that the tweet was a “misunderstanding” and that Israel was “sorry for any hurt.”

The row revived debates about the long-term price the Jewish state has paid in walling itself away on multiple fronts—between the West Bank and East Jerusalem and with newer, more high-tech fences on the Israeli borders with Egypt and the Gaza Strip. When Israel completes its border wall with Jordan, it will be entirely enclosed.

For Israel, one could argue that border walls have brought some strategic value. The 150-mile wall along Israel’s southern border with Egypt, for example, stemmed the flow of African refugees. Between the years of 2006 and 2016, some 60,000 refugees entered through the country’s porous border and placed a burden on the country’s poorest neighborhoods. By the time the fence was completed in 2016, Israeli politicians were crediting it with a dramatic drop-off in crossings.

But any strategic gains did not ease the moral dilemma that the African migrants posed to Israel, a state created as a homeland for displaced Jewish refugees in the wake of the Holocaust. Many of the new arrivals were survivors of the Darfur genocide or Eritreans fleeing a brutal military dictatorship. Their arrival sparked soul-searching in Israel, one of the first signatories of the 1951 United Nations Refugee Convention, which formally committed itself to respecting the rights of refugees and its obligations to them.

That national debate on refugees and migrants continues to fester, with the Israeli Right arguing that after centuries of Jewish persecution, Israel is responsible for protecting itself from “infiltrators.” Meanwhile, the Israeli Left has called upon the country to honor its universal values, and the Supreme Court has repeatedly struck down parliamentary measures to indefinitely detain or deport migrants.

African migrants behind a fence in Israel's southern Negev desert.

While Israel’s southern border may be the subject of intense debate, even less celebrated as a “great success” is the 440 mile-long wall surrounding the Palestinian Territories and East Jerusalem. Erected in the early 2000s during the mass wave of suicide bombings of the Second Intifada, the infamous wall has appeared to deter some terrorist activity, with the number of bombings attributed to the Islamist organization Hamas significantly decreased.

But the wall certainly hasn’t put an end to Palestinian terrorism, which is very much alive–young and more decentralized but no less deadly.

In the recent “knife Intifada,” hundreds of politically-unaffiliated Palestinian youths targeted soldiers and civilians on the street using knives, vehicles, and other unconventional weapons. Many were believed to have grabbed their weapons after watching viral videos that claimed incorrectly that Israelis were planning to desecrate the Temple Mount site in Jerusalem, Islam’s third holiest site. Those assailants included many young West Bankers who grew up in the shadow of the wall, which for many Palestinians “is a symbol of denial of the Palestinian right to freedom and independence,” said Xavier Abu Eid, a spokesman for the Palestinian Liberation Organization in Ramallah, the de-facto Palestinian capital in the West Bank.

But while crossing from the West Bank into Israel is more complicated than a decade ago, the wall is not yet finished, making it penetrable. Tens of thousands of Palestinians pay smugglers every day to transport them through the wall’s literal cracks so that they can work for much higher wages in Israel’s black market. Others pass those gaps to carry out terror attacks. In June, two men from the West Bank village of Yatta slipped into Israel and gunned down four people at a Tel Aviv market.

The Israeli barrier near the West Bank refugee camp of Shuafat

Israeli military officials have been the first to say that, despite the lofty claims of politicians like Netanyahu or Trump, a wall is not designed to fully eradicate terrorism or other similarly complex security or economic challenges. On its multiple borders, the deterrent value of Israel’s walls and fences create extra hurdles for potential terrorists, but also forces them to become more organized and better trained, said Israel Ziv, the former commander of the Israeli military division in Gaza who was in charge of designing the route.

Known as the “security fence” in Hebrew and “apartheid wall” in Arabic, Israel’s barrier with the West Bank is viewed broadly by Palestinians and Arabs across the region as evidence of Israel’s racist policies. Critics accuse it of collectively punishing all of the 3.8 million Palestinians who live in the occupied territories, and say that it foments anger among Palestinians who blame it for separating them from their families, neighbors, land, and livelihoods.

“The [West Bank] wall had a double impact. It absolutely improved the security situation, but for Palestinians to have this thing in their face on the day to day” fuels anti-Israel resentment, said Ziv.

“Ultimately a wall cannot be preventative. It’s only a silly obstacle that, just after being built, can always be bypassed,” he said.

The existing structure between the West Bank and Israel took more than three years to build, millions of tons of steel and around 11 billion shekels (roughly $2.9 billion). It costs an additional 8 percent of that amount in upkeep every year.

But the costs of protecting a country the size of New Jersey are small in comparison to Trump’s proposed wall. If built, Trump’s wall will span 1,900 miles and even by conservative estimates will cost billions.

People with the motivation to move will always find ways of doing so.

The size of Trump’s wall won’t really matter though: Migration experts have long asserted that people with the motivation to move will always find ways of doing so. And if Israel’s experience is any guide, walls certainly don’t improve relations between neighbors or help enemies move any closer to peace.

Talk of a possible upcoming war with Hamas was revived again since a renewal of rocket fire earlier this month. And Hamas’ announcement on Monday that it has appointed Yehiya Sinwar—described even by Hamas members as extremist—as its new leader does not bode well. Recent polls show that the majority of Palestinians supported the wave of stabbings that last year killed 47 Israelis. For their part, Israelis, too, have radicalized, with nearly half saying they believe all Arabs should be expelled from Israel.

“Today we see that separation has made it easier for Israelis and Palestinians to demonize each other,” said Danny Tirza, who headed the military body in charge of planning the wall’s route. While border walls may have accomplished Israel’s immediate security goals, he said, those goals are limited as long as political progress stagnates.

“We are always rushing to finish the job, and stay one step ahead, but we also know that we are leaving destruction behind us,” he said.