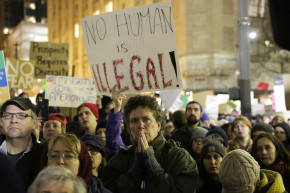 This week alone, 800 refugees were scheduled to arrive in the U.S.

Over 800 refugees were scheduled to arrive in the U.S. this week, according to the United Nations High Commissioner for Refugees. The executive order prohibits all travelers—except US citizens— from Iran, Iraq, Sudan, Libya, Yemen, Syria and Somalia from entering the country for 90 days, and suspends the Refugee Admissions Program for 120 days. Based on monthly resettlement data over the last fifteen years, the U.N. estimates that about 20,000 refugees would have resettled in the U.S. over the four-month long ban.

“Refugees are anxious, confused and heartbroken at this suspension in what is already a lengthy process,” The refugee agency said in a press release on Monday.

There are 21 million refugees in the world, according to the UNHCR’s 2015 estimates, with 4.9 million from Syria, one of the countries on Trump’s ban. The statement emphasized that refugees should “receive equal treatment for protection and assistance, and opportunities for resettlement, regardless of their religion, nationality or race.”

“Refugees share the very same concerns about security and safety that Americans have. They themselves are fleeing war, persecution, oppression and terrorism,” the UN said in its press release.