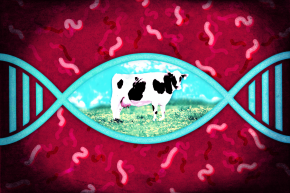 Tuberculosis-Resistant Cows Are A Thing Now, Thanks To CRISPR
By Ed Cara

Tuberculosis-Resistant Cows Are A Thing Now, Thanks To CRISPR

One of bacteria’s greatest tools is their ability to don genetic mutations like a suit of armor, letting them resist outside threats like the antibiotics we commonly use against them. Some bugs have even used these genetic tweaks to become virtually indestructible to any and all drugs. It’s fitting then that a team of Chinese scientists have taken a page out of the bacterial playbook and crafted a mutation that allows cows to better fight off a disease common to both them and humans, tuberculosis.

Researchers from China’s Northwest A&F University used the gene-editing technology CRISPR to create 11 cows whose added genes made them resistant to a TB-causing bacterium. Throughout various experiments, including real-world exposure to the germ, the TB-proof cows lived up to their name. They showed fewer signs of infection and less bacterial growth than a control bovine group. And in a move that could have even bigger implications for the development of gene-editing in animals and humans alike, nine of the cows were bred using a newer form of CRISPR that the researchers said reduced the risk of side effects like unintentional genetic mutations.

The findings were published Tuesday in Genome Biology.

Traditionally, CRISPR slices through both strands of the targeted gene’s DNA. It’s a process that prompts the cell to repair itself in a way that can cause other, unwanted mutations to show up. But the newer method, developed by some of the original discoverers of the technology, seemingly circumvents this by cutting DNA strands one at a time, triggering a less clumsy form of DNA repair. And that’s exactly how it played out in the current study, with the two cows made via traditional CRISPR having mutations that the other nine cows didn’t. The lack of extra mutations was also aided by the careful selection of where exactly to insert the TB-resistant gene, the researchers said.

While cow tuberculosis, like its human cousin, rarely occurs in the U.S. nowadays, poorer countries have a harder time dealing with it. Much like genetically modified crops, CRISPR could someday offer farmers abroad another way of protecting their livelihoods. Already, scientists are in the works of using CRISPR to create mosquitoes incapable of spreading malaria and Zika, beefed-up pooches, and even ways to treat cancer in people. And like the current study, much of this cutting edge research has been performed in China.