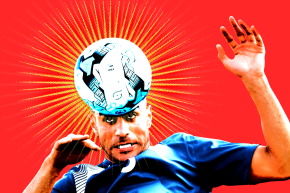 Study: Heading The Ball In Soccer May Cause Concussion Symptoms
By Ed Cara

Study: Heading The Ball In Soccer May Cause Concussion Symptoms

Heading-related concussions may be more common than we thought

A cherished aspect of soccer may be causing long-term harm to athletes’ brain health — at least so suggests a new study published Wednesday in Neurology.

More than 200 amateur soccer players reported how often their heads hit something else while playing soccer during a two-week period, whether by intentionally heading the ball or getting into a collision with another player. The players also reported if they experienced any symptoms commonly seen with concussions, like headaches and dizziness. The researchers found that while accidental head impacts were the most common link among people reporting concussion symptoms, players who loved to head the ball were also at increased risk. And the more often players headed the ball, the more likely they were to develop a concussion, further implying a direct connection.

The findings throw into doubt earlier studies that indicated heading the ball was largely harmless, and reignite the question over whether the practice should be banned in youth soccer and elsewhere, especially given the growing amount of research showing that repeated head trauma can lead to serious mental and cognitive problems down the road.

“The prevailing wisdom is that routine heading in soccer is innocuous and we need only worry about players when they have unintentional head collisions,” said senior study author Dr. Michael Lipton, a neuroradiologist and neuroscientist at the Albert Einstein College of Medicine in New York, in a statement. “But our study suggests that you don’t need an overt collision to warrant this type of concern.”

In an email to Vocativ, Lipton added, “Heading can cause concussion, but also causes many impacts that may not be concussive or may not be recognized as concussive.”

Around 20 percent of players reported moderate to severe concussion symptoms, the equivalent of someone getting a head injury six times during a year’s play of soccer, the authors wrote. And the top 25 percent who headed the most (a median 125 headings in a two-week span) had an associated higher risk of symptoms similar to those who got accidentally conked in the head once — around three times higher than someone who rarely headed the ball or who never had a head injury.

The scientific debate over heading has raged on for years. Some have touted studies, often admittedly small, showing that frequent heading can cause players subtle brain damage. Lipton’s team, for example, released a study in 2013 showing that a third of players who had headed the ball over a thousand times during a year’s worth of soccer had the same sort of tiny brain abnormalities you’d see from a typical concussion. These players were also more likely to have poor memory and cognition.

But other research has laid the blame for soccer-caused concussions squarely on injuries or improper play, including a 2015 study of high school players in JAMA Pediatrics. Though the study concluded that heading was responsible for around a quarter of all reported concussions, it went on to blame the vast majority of these on player collisions. However, Lipton said the JAMA study only focused on concussions diagnosed by sideline trainers, which may have underestimated the real number, and that it didn’t quantify how often headings happened or if they were related to later symptoms, which his team’s study did.

What is known is that soccer-related concussions have been on the rise over the last decade. A 2016 study in Pediatrics, for instance, found that while concussions were only 7 percent of soccer-related injuries that sent kids ages 7 to 17 to the emergency room from 1990 to 2014, the rate of concussion-related ER visits has shot up dramatically since 2008. And 2014 alone saw at least 22,000 concussions reported to the ER. Some of this rise is tied to the sport’s increasing popularity, as well as greater awareness on how to spot concussions, but the actual risk of concussion may also be increasing, the authors speculated. And for whatever reason, girls seem to be at even higher risk still.

However the dust settles, some organizations have already taken preemptive steps to protect their players. In 2015, the U.S. Soccer Federation banned kids 10 or younger in their youth soccer leagues from heading completely, while restricting it to only during practice for 11- to 13- year-olds. According to Lipton, though, the age limit is essentially arbitrary — there’s no scientific evidence that being allowed to head the ball once you’re over 13 is any safer. And without proper training on how to head the ball, kids could be in even more danger once they’re let off the chain.

While calling for more research on the impact of headings, Lipton said that players should for now be aware that concussion symptoms “are likely more common than they realize.”

“You do not need to be knocked senseless to have sustained a concussion,” he added.