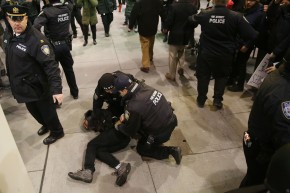 President Trump’s confusing, chaotic executive order against travelers arriving from seven Muslim-majority countries has prompted federal agents to demand travelers — some of them legal residents — hand over access to their electronic devices and social media accounts to be searched, their lawyers say.

Since the order’s surprise signing on Friday, scores of refugees and legal U.S. residents have been detained at and deported from airports across the country, followed by multiple federal courts ruling against detaining those who were in transit to the U.S. when Trump signed the order. Unlike temporary visitors, who are granted visas, green card holders are permanent legal residents that have already been granted the right to enter and leave the country freely.

But even though some of the people detained have since been allowed entry, lawyers providing them legal assistance say many travelers are also being coerced by airport customs agent into letting government agents search their computers, phones, and social media accounts upon landing in the U.S.

Trump’s order, which has spurred massive protests across the country since going into effect on Friday, has emboldened a controversial form of interrogation that started in the final days of the Obama administration. Last December, U.S. Customs and Border Patrol began asking some visitors and legal residents to provide information about their social media accounts, using a new field added to forms normally filled out when entering the country. Civil rights organizations slammed the move as threatening to free expression and ripe for abuse, but officials at the time said that providing that information was optional.

Since the executive order was implemented, however, many of those being denied entry at airports across the country have reported being specifically questioned by border agents about their social media presence, as well as being forced to give agents access to their phones and other devices.

Fred Jennings, a digital rights attorney with the law firm Tor Ekeland, P.C., was one of the dozens of lawyers providing legal assistance to travelers detained at New York’s John F. Kennedy International Airport. He spoke to one legal U.S. resident from a North African country who was detained and questioned by CBP agents for seven hours without any food or water, he said, and during the interrogation, the traveler was ordered to open their laptop and let customs agents examine personal files and social media accounts.

“[The agents] went through all browsing history, took down the computer login password, went through the person’s Facebook account, and went through image files on the computer” before seizing the device, Jennings told Vocativ. “This is a green card holder. They’ve never been treated this way on prior trips.”

Mike Stanek, another volunteer lawyer who was at Dulles airport in Washington, D.C., said he spoke with a U.S. passport holder of Iraqi descent who was pulled into secondary screening by customs agents and asked for his social media account information. And according to CNN’s Jake Tapper, White House officials have also considered requiring that all U.S. visitors share their web browsing histories and phone contacts, or risk being denied entry.

“My understanding from other people who’ve dealt with this is it’s not uncommon for some people to be asked for their social media” directly since the policy changed last year, Stanek told Vocativ. “Unfortunately, this is becoming much more common for people arriving from certain parts of the world.”

A CBP spokesperson did not respond to Vocativ’s request for comment by press time.

Sophia Cope, a staff attorney with the Electronic Frontier Foundation, says that while it’s hard to say for sure, it seems the CBP’s internal policies on border searches implemented during the Obama administration are now being expanded under Trump.

“I have no quantitative data on this, but as a lawyer who focuses on this issue, it definitely seems like CBP is ramping up device searches,” Cope told Vocativ. “And if they’re not searching the devices directly, they are asking people for social media information.”

The reports point to a disturbing trend that has intensified in the days since Trump issued his executive order on immigration, and has affected not only legal residents, but U.S. citizens. Two days before the inauguration, the Center for American Islamic Relations filed 10 complaints against CBP after hearing from Muslim-American citizens who said they were interrogated about their political and religious views and had their devices and social media accounts scrutinized when returning to the United States from abroad. The complaints say that CBP agents asked Muslim travelers a long list of invasive questions, including “What do you think of the USA?” as well as for religious details such as “What mosque do you attend” and “Are you a Sunni or Shia?”

Several U.S. citizens have reported violence from CBP agents after refusing to comply. According to one of the complaints filed by CAIR, a Muslim-American man attempting to cross the Canadian border back into the U.S. was choked and pinned by border agents after he refused to unlock his phone.

“What we feared is that this supposedly narrow policy of asking for social media accounts would be expanded to everyone coming into the U.S.,” Cope told Vocativ. “That fear that we expressed seems to be what’s happening.”

Cope recommends encrypting all devices before traveling, and says that U.S. citizens can’t be denied entry into the U.S. for refusing to unlock devices or reveal their social media accounts. But in doing so, they also risk having their devices seized, or being subjected to further questioning from customs agents. CAIR similarly advises U.S. Muslims “not to answer questions about their religious beliefs, political views, and social media accounts.”

Four federal judges have ruled against Trump’s travel ban since it came into effect on Friday. But many customs agents and officials are still refusing to comply with the courts’ orders, keeping dozens of legal residents in detention at airports, and in some cases coercing them into surrendering their green cards.

On Sunday, John Kelly, the new head of the Department of Homeland Security, seemed to back down, stating the order shouldn’t apply to green card holders. But Kelly’s statement did not explicitly guarantee entry to legal residents, saying only that permanent legal resident status will be “dispositive factor” in the determinations made by border agents on a “case-by-case basis.”