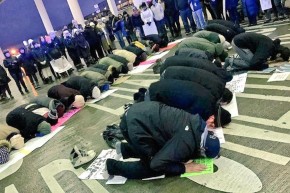 Detroit Protesters Laid Down Their Protest Signs So Muslims Could Pray

Muslim demonstrators didn't have prayer mats for Sunday's sunset. Thanks to fellow protesters, they didn't need them

Muslims use protest signs as prayer mats at a demonstration in Detroit — Diana Hussein
By Ryan Beckler
Jan 30, 2017 at 2:27 PM ET

A group of protesters, gathered to voice their anger at Donald Trump’s refugee ban, pitched in to help a group of Muslims, and created one of the most poignant images of the weekend.

On Sunday, thousands of Detroit residents assembled at their local airport, as did protesters around the country. The 5:43 p.m. sunset was quickly approaching outside of McNamara terminal — and for the Muslims on hand, that meant it was nearing the time to pray. Protest organizers swiftly coordinated a spot in a pickup area of the city’s largest airport.

“Many of the Muslim activists gathered and said, ‘Let’s pray right here,’” Bilal Dabaja, who participated in the prayer, said. “It was kind of spontaneous.”

But there was a problem: It had just started snowing and the lanes set aside for prayer had become damp. Muslims kneel during sunset prayer, but yet this cold Michigan night, there were no prayer mats to be found.

That’s when protesters of all ages and races put down their colorful signs — not in defeat of an administration that had just banned refugees from seven Muslim-majority countries, but so those praying could do so without getting wet in sub-freezing temperatures.

Today, at Detroit Metro Airport, protesters made room for Muslims to pray.

The act gave a Dabaja, a 31-year old Lebanese man from Dearborn, a new sense of hope.

“It just shows the beauty of coming together,” he said. “We have things that bind us against the wrong that we see. Seeing people from various backgrounds whether they’re religious or not religious, Christian, Jew, whatever the case may be… They were there in act of solidarity.”

Detroit’s airport protests were one of dozens over the weekend. Demonstrators from Boise to Miami showed up to terminals nationwide to protest Donald Trump’s latest executive order that halted any immigration from seven countries deemed “terror-prone” —Syria, Yemen, Sudan, Somalia, Iran, Iraq, and Libya.

“It’s like a full on assault on us as Muslims living in this country, especially people who have families in these countries,” Dabaja said, while wondering if this executive order was just the tip of immigration iceberg for the Trump administration. “These seven countries could soon expand to many, many other countries, and pretty soon we could find ourselves in a much more difficult situation.”

But for a few minutes in Detroit, protesters, paper posters, and prayers created a moment of unity in a city that is home to one of America’s largest Arab American populations.

“It was a beautiful thing. You have a stronger hope for humanity. With all of the evil and wrong that we see in the world, there are people who are willing to stand there even with something as simple and symbolic as prayer.”