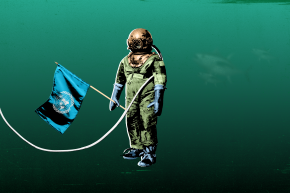 No One Rules The Deep Sea, So How Do We Protect It?
By Alexandra Ossola

No One Rules The Deep Sea, So How Do We Protect It?

More than half of the Earth’s surface is not subject to any form of law, and that area happens to be at the deepest part of the ocean. Now human activities in the ocean are plunging to deeper depths, and some experts have recommendations for rules that should make sure those activities don’t endanger the strange, fragile life that exists there.

There’s a lot that scientists don’t know about the deep sea, the part of the ocean more than 200 meters deep. Little light, high pressure, limited oxygen, and low temperatures make this a challenging, extreme ecosystem for life. And, yet, the deep sea is far from barren — crabs, tube worms, sharks, squids, and octopi have evolved to thrive there. The ecosystems are, perhaps counterintuitively, fairly delicate and grow slowly; but the health of these ecosystems affects the function of those closer to the ocean surface.

More These Sea Creatures Will Give You Nightmares

Humans are increasingly turning to the deep sea as they seek resources that have become more scarce near the surface, including fish, oil and gas, and minerals such as copper and cobalt. But there are few regulatory protections for these ecosystems. Much of the deep sea is outside the jurisdiction of any particular nation, and though international governing bodies such as the United Nations and the International Seabed Authority have begun formulating rules to inhibit industrial activity there, no sweeping regulations have yet been passed.

In a policy piece published Thursday in the journal Science, 11 marine ecologists suggest what kinds of regulations would enable industry to function in the deep sea without putting the ecosystem at risk. The researchers note that more observations need to be done in the deep sea to understand which areas are most at risk of disruption by human activity. Doing that well will require a fair amount of sophisticated, hardy equipment that the researchers estimate will cost $2-3 billion. The study authors suggest that relevant industries, along with G7 countries, collaborate to build on their existing infrastructure to gather more data and pay for the instruments to do so. They recommend that a designated UN agency, either a new one or an existing agency with an enhanced purview, should set environmental goals and make sure that they are met. Only then, with proper observations, metrics, and goals, can deep sea ecosystems be properly protected by regulators.

The researchers hope that their suggestions might shape the discussion at the third session of the UN Preparatory Committee, in which officials will continue to develop “an international legally binding instrument under the United Nations Convention on the Law of the Sea (UNCLOS) on the conservation and sustainable use of marine biological diversity of areas beyond national jurisdiction.” The meeting will take place in New York City in March.