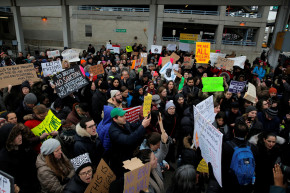 Protesters Gather At JFK In Support Of Detained Refugees

Demonstrators on Saturday gathered at John F. Kennedy International Airport to protest the detainment of two Iraqis. The pair was locked up following an executive order signed by President Donald Trump that bans all travelers from seven Muslim-majority countries.

People gathered at the Terminal 4 arrivals area in the afternoon after a protest was organized on social media. Demonstrators held signs reading “Refugees Welcome” and “Let Them In.” A source on the ground told Vocativ that several hundred people were present at the terminal, and that the crowd was growing fast.

“We’re here to tell Trump that we are not going anywhere,” lawyer and refugee advocate Jacki Esposito, who helped organize the protest, told NBC News. “Today is the beginning of a long opposition from us, and our neighbors all over the country.”

U.S. Representatives Jerry Nadler and Nydia Velazquez were also at JFK, and met with Customs and Border Patrol personnel at the airport to try provide legal access to the detainees. Nadler and Valezquz on Saturday issued a joint statement demanding both refugees be released. “Today, we saw in real human terms the damage and the absurdity of Trump’s policies. The president’s executive order is mean-spirited, ill-conceived, and ill-advised,” they said.

Roughly four hours after the news broke, Nadler announced on Twitter that one of the Iraqi detainees, Hameed Jhalid Darweesh, was released from custody. Darweesh was being held despite his having a valid visa. However, the Department of Homeland Security on Saturday confirmed that Trump’s order applies even to those with green cards.

Another protest is scheduled to take place at JFK at 6 p.m. on Saturday.