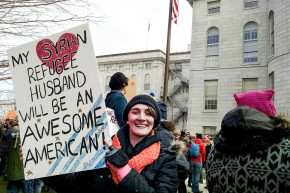 Vocativ spoke with families who have been waiting to enter the U.S. only to have their hopes dashed by Trump's executive action

President Donald Trump on Friday signed an executive order putting forth what he calls “extreme vetting” measures aimed at keeping out “radical Islamic terrorists.” The draconian order also includes curbs to accepting refugees and blocks immigration from certain Muslim-majority countries on the ground that they are more susceptible to terrorist activity.

The order is titled “Protection Of The Nation From Foreign Terrorist Entry Into The United States,” and it prevents every person from several “terror-prone” countries —Syria, Yemen, Sudan, Somalia, Iran, Iraq, and Libya — from coming to the U.S. for 90 days. It also suspends the U.S. Refugee Admissions Program for 120 days, while preventing all refugees hailing from Syria from coming to the country for an indefinite amount of time. Further, a spokesperson for the Department of Homeland Security confirmed to Reuters on Saturday that the ban “will bar green card holders.”

Predictably, Trump’s actions have shaken the world, as people both inside and outside of the U.S. question what the future holds for them. Vocativ spoke with several people — Muslims and non-Muslims — that are likely to be impacted by Trump’s measures.

Some people are married to U.S. citizens and are already in the process of obtaining their green cards. Stephanie Crosby, an administrative specialist at the University of Maine, has been separated from her husband, Zakaria Allaf, a Syrian refugee, for over a year now. Since their wedding in June 2015, their lives have been complicated by a collage of visa requests, green card applications, and interviews. The couple met and married in Lebanon, tried and failed to go work in India, and are now a world apart: Crosby is in Hampden, Maine, and Allaf is seeking asylum in Kuala Lumpur, Malaysia, following a 10-month stint in Nepal.

“I guess the worst-case scenario is that I have to leave the country in order to be with him,” she said. “I don’t think that it’s right for us to wait around any longer after being separated for over a year. It’s just ridiculous.”

The couple have been trying hard to adjust to their transoceanic relationship. And although their lives are made easier by supportive friends and family, Crosby says that eventually, she might have to leave the U.S. behind for Malaysia or elsewhere if America cannot accept her husband. Crosby told Vocativ that her husband is at the “tail end” of his green card application process. But given Trump’s executive order and the fact that Allaf is a Syrian Muslim, she is “scared” and has no idea what is going to happen with him or his paperwork.

“We right now are at the point where we are waiting for him to get a visa interview, which I guess means that his application has pretty much gone through almost all the way,” Crosby said in a phone call Thursday. “But we’ve been waiting for over a month for that interview date to be scheduled, and now this happened.”

Crosby at first didn’t take Trump seriously as a political candidate. But as he continued to rise to prominence and when he clinched the Republican nomination last July, she became concerned. “It has been lurking at the back of my mind,” Crosby said. “I can’t say I was totally surprised that…this policy has been made.”

For Rachel R. and her husband Alan K.,—who did not want Vocativ to make public their last names — dealing with the situation together is also not easy. Alan is also in the middle of trying to obtain his green card, though his Iraqi passport will undoubtedly complicate matters under the Trump administration.

Rachel is an American originally from Virginia, and Alan is an Iraqi Kurd who was born in Baghdad. Both work at the American University of Iraq in Sulaimani, a small city in Iraqi Kurdistan where they also live. They have been married for about a year and have had continuous issues obtaining any kind of visa for Alan.

“We applied first for a tourist visa just to go and visit [my family], but that was denied,” Rachel told Vocativ on Friday. “Then we got on the path we’re on now. In May of last year, we had started the process for the green card, and that is ongoing.”

Like Crosby and her husband, Rachel is uncertain whether or not the fact that her husband was already in the middle of his green card application will have any effect on the situation. Before the ink on Trump’s executive action has even dried, there were already reports that permanent residents (green card holders) from the affected countries are being denied entry at U.S. borders. Rachel is aware of the reputation her part of Iraq has. “This area is often demonized and forgotten because there’s been so much war and death and violence,” she said — a sentiment that can be applied to any other country on the list, as well.

Still, Rachel’s family has thankfully been able to travel and meet her and Alan, but she is still frustrated that they now have no idea when they will be able to travel to the U.S. “For me the worst-case scenario is that it continues to drag out,” Rachel said. “This was already difficult before the new order was out. It’s just one of those things —I want my husband to meet members of my family.”

Moreover, Rachel says Trump’s ban affects much more than just her and her husband. The executive order will undoubtedly limit the opportunities her students will have to gain scholarships and study in the U.S. “There are educational opportunities being lost, and we have some spectacular students here,” she said. “It’s heartbreaking that everything they’ve gone through…that opportunity is taken from them because of this fear.”

Trump’s policies will only further alienate people like Khaled Ayed — asylum seekers whose applications were filed years ago only to be met by a blanket ban on their country of origin. Originally from Damascus, Ayed, 30, his wife, and three children recently fled the civil war in Syria, and are currently residing in Irbid, Jordan, after spending time in a refugee camp. He told Vocativ in a Facebook message that he and his family were interviewed for asylum to the U.S. in 2014 and are still waiting to hear back.

“We have been waiting in Jordan since 2014 — they are killing us,” he said. “All my friends moved to Canada, Britain, and Australia in less than six months.” Ayed added that their journey was postponed initially due the arrival of another child nine months ago, but despite having all the necessary medical paperwork ready now, their asylum has been continuously delayed since then.

Understandably, Ayed is incredibly distraught over her family’s situation. “We had a dream in our heart for security and stability and now we feel lost,” he said. “We ask Trump to think about us and about our children. We lost our dream and youth, we are being killed and displaced, and want to live in peace. I’m afraid for the future of my children.”

But even those already in the U.S. are concerned about what their futures hold. Raida al-Shami, a Syrian refugee originally from the embattled city of Homs, resides in Florida. She arrived to the country seven months ago with a program sponsored by the United Nations’ refugee arm after spending roughly four years in Lebanon. Although she’s in the U.S., she hasn’t yet received her green card — a major source of anxiety.

“I want to tell Trump that we were expelled from our country, and both sides suffered [government and rebels],” al-Shami told Vocativ through Facebook Messenger. “We want to live in peace and have our papers, as was promised by the U.N…The American Embassy in Lebanon promised us citizenship five years ago.”

But given her tumultuous past and a potentially difficult future, al-Shami recognizes that permanent resettlement in the U.S. might not be an attainable goal. “If they cannot provide us with our rights, it is better to move to another country,” she said.