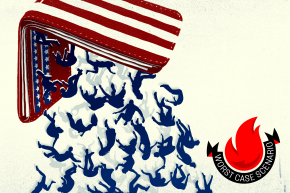 How Trump’s Deportation Plans Would Wreck The Economy

What if Donald Trump could actually deport all 11 million undocumented residents? In short: economic disaster

Lenka Mendoza, her husband, and their two small children fled their home in Peru about 18 years ago amid a brutal civil war that claimed the lives of as many as 70,000 people. The couple obtained work visas, got jobs, and settled in a Washington D.C. suburb in northern Virginia. Mendoza studied business administration and found work as a hotel supervisor. Then their visas expired and they were forced to make a choice: return to their war-torn country or stay in the U.S. and run the daily risk of getting deported.

They rolled the dice. Mendoza and her family still live in Virginia. She still works as a hotel supervisor. Her children have essentially grown up here and consider it home. But all that could change if Mendoza gets so much as a traffic ticket.

“Driving without a license is a big risk because you have to do it to go out to work, you have to leave to bring the kids to the doctor if they get sick, you have to bring them to school, you have to go buy food,” she said in an interview in August, shortly after then-candidate Donald Trump pledged to track down and deport anyone with circumstances like those of Mendoza and her family.

Last Wednesday — on just his fifth day as president — Donald Trump started signing a flurry of executive orders aimed at curbing immigration. Alongside a ban on entry from several Muslim-majority nations, Trump also signed orders calling for thousands more immigration agents and construction of detention centers. The administration has wavered on who its deportation efforts will target first but has made clear that deporting all 11 million undocumented people living here, like Mendoza and her family, remains its goal.

There are still massive legal, practical and political hurdles between Trump and deportations anywhere near that scale — and a resistance movement that is primed to fight back. But what if Trump actually did it, removed roughly one in every 30 Americans? In short, between the human toll and the economic fallout, it would be a disaster.

“Simply removing 11 million people from the population is not good. You lose about 7 million private sector workers, and then you lose about 11 million consumers; 11 million people who could potentially start a business,” said Ben Gitis, the director of labor market policy at the American Action Forum (AAF), a right-leaning, Washington D.C.-based domestic policy think tank.

In all, Gitis said, removing all the millions of undocumented people from this country would result in a hit on the economy to the tune of $1.6 trillion. Other studies put the cost of executing Trump’s campaign promise of removing those in the country illegally at roughly $2 trillion, according to analysis of several studies conducted by various groups, including Gitis’.

And that figure doesn’t even include the cost of bringing people back legally, as Trump promised to do on the campaign trail when his hawkish attitude towards undocumented immigrants proved to run far beyond that of the mainstream consensus on how to confront immigration reform.

The AAF report, released in March of 2015, found that it would take close to 20 years to round up each of the 11 million undocumented immigrants in the country, and would cost between $43 and $243 billion just to track them down. Once Trump’s deportation squads apprehend these people it would cost an additional $35 billion to detain them. Billions more would have to be spent on legal costs and transportation for a total that could run north of $615 billion, the study found.

But even after deporting scores of undocumented immigrants back to their native countries, the U.S. government would need to spend an additional $315 billion over 20 years for border enforcement, according to the study.

At the end of the day, it would cost nearly $1 trillion to remove undocumented immigrants from the country. That figure doesn’t reflect the GDP dollars that would follow the immigrants out of the U.S.

Of the estimated 11 million undocumented immigrants in the country, about 8 million of them are working in various industries, according to a recent Pew Research Center report. In November, just days after Trump’s shocking victory, the National Bureau of Economic Research released a study that shows which industries would be most affected if the newly elected president were to make good on his mass-deportation plan and the economic hit the country would take.

Without the work of undocumented workers, the manufacturing industry would lose about $74 billion annually. The wholesale and resale industries would lose out on about $65 billion. Construction, one of the industries that have helped make Trump a billionaire, would be short about $48 billion, the study found. Those are just three industries that rely heavily on the work of people in the country illegally — the previously referenced AAF report found that after all the illegal immigrants were removed from the country, the real GDP would be “$1.6 trillion smaller than it would be if the government did not remove all undocumented immigrants. While this impact would be found throughout the economy, the agriculture, construction, retail and hospitality sectors would be especially strongly affected.”

The argument could be made that U.S. citizens would fill the void left after this theoretical deportation of millions of undocumented immigrants, but there might not even be enough people to fill those jobs; as Pulitzer Prize-winning Politifact explains, the official number of unemployed Americans is 8.3 million, a figure that only includes people actively seeking work.

Based on his research, the AAF’s Gitis has little confidence that there would be enough citizens to fill the jobs left vacant by the millions of people deported under Trump’s grand plan to reform the immigration system by rounding up and deporting 11 million people.

“If all undocumented immigrants were just gone, we found that there would still be substantial gaps in employment,” he said, adding that “workers from out of the labor force would need to come in, and we don’t really know whether wages would increase enough to draw those people back.”

Based on Gitis’ research, published in a May 2016 report, there would be an employment shortage of at least 4 million workers in the private sector if the president’s plan to deport 11 million people comes to fruition.

The financial toll of Trump’s deportation pipe-dream fails to compare to what it would do to millions of families with undocumented relatives. Another Pew study, published in 2014, found that in 2012 about seven percent of all K-12 students — both citizens and undocumented — had at least one undocumented parent residing in the U.S., up from about three percent in 1995.

One of those parents is Eddie (who asked we not use his real name), who was brought to the U.S. when he was eight years old after his family paid a “coyote” a few hundred dollars to take him from Leon, Guanajuato, Mexico, across the border to join his parents — who were in the U.S. working illegally — more than 1,500 miles north in California.

In the decades since, Eddie, now 35, paid his way through school, earning two Master’s degrees, in both math and economics. He’s married and is the father of a two-year-old daughter. He has no criminal record. Yet, he currently risks deportation — being ripped from his family and sent to a country he barely knows — under Trump’s plan.

“I don’t get on planes because I run the risk of being detained,” he said in an interview last summer. “I can’t legally get a job. As a matter of fact, short of starting your own business, it is nearly impossible to get a good paying job because you have to do a background check… the best way to describe my life is that I have to live in the shadows.”

Eddie is technically a “dreamer,” an undocumented immigrant who would benefit from the DREAM Act — a bipartisan plan for immigration reform that would allow undocumented people who were brought to the country as children to live without fear of deportation and potentially gain citizenship. The plan dates back to the Bush administration, and White House support for it extended to President Obama and members of Congress in both parties who have tried for years to come up with a reasonable, fair formula for comprehensive immigration reform. After just over a week in office, Trump appears to be sprinting in the opposite direction — and people like Eddie are terrified.

“My biggest fear is being separated from my girls. I’ve been with my wife for fourteen years, and during those fourteen years we have not been apart for more than a day or two,” he said. “Now we have a beautiful daughter. It is just inconceivable that I could be without them for ten years or more. If you’ve been in the US for over a year and you leave or get kicked out, you trigger the ten-year bar. Can you imagine being apart from your family for ten years or more?”