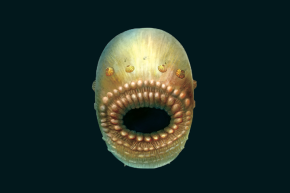 The way evolution works is that, if you go back far enough, any set of species have a common ancestor. And if you’re willing to go back far enough in time and find a common ancestor for a wide enough range of species, you’re going to meet some strange, alien creatures. Case in point: A newly discovered species from 540 million years ago is the earliest known forerunner of humans — and every vertebrate, plus other creatures like sea urchins and starfish. The great-great-grandparent of all those species was a hell of a sight, even if you would have needed a microscope to see it.

Discovered by a team from Cambridge University and China’s Northwest University, our new earliest known ancestor is called Saccorhytus coronarius. It measured only about a millimeter in length, and a large percentage of its body was its giant mouth. Not that it was necessarily just a mouth: The researchers say they have found no evidence the creature had an anus, which may well mean that giant opening was used both to consume food and expel waste.

About 20 million years older than previously discovered fossils, Saccorhytus appears to represent a more primitive, common ancestor of several of these other species. The researchers suspect the creature lived on the bed of a shallow sea, wriggling between grains of sand. While there aren’t many traits to connect this critter with humanity, it does show some early signs of other species’ most prized features. The conical features that run along its body look like they might have been used to release water it had swallowed, possibly making them the first evolutionary sign of what would become fish’s gills.

It’s not easy to wrap one’s head around just how ancient this creature was. The very first dinosaurs emerged 230 million years ago, meaning Saccorhytus is easily more than twice as old as the earliest dinosaur. While the dozens of Saccorhytus specimens found by the researchers aren’t the oldest known fossils — there are bacterial fossils from 3.5 billion years ago that make this look like a whippersnapper — they do represent possibly the oldest known link in an evolutionary chain that connects humanity and countless other species to the origins of life. And, as the researchers observe in their paper, these creatures may well represent the upper limit of what we can expect to find, or at least close to it, as its microscopic size means it’s unlikely any of its potentially even smaller ancestors would have been able to fossilize.

So there’s a very real possibility that humanity’s earliest known ancestor is a tiny sack with crap coming out of its big mouth. One could reasonably argue how much has actually changed in the half a billion years since then.