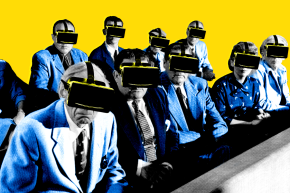 Virtual Reality Is Heading To The Courtroom
By Alejandro Alba

Virtual Reality Is Heading To The Courtroom

It might help the jury and judge see exactly what happened, rather than using their wild imagination

Virtual reality has helped us explore the surface of Mars, create virtual 3D-paintings, and shoot robot invaders in our living room. Now, the nascent technology is heading in a direction that could help judges and jurors revisit crime scenes to see exactly what happened.

The idea of using VR in courtrooms is not new, but attorneys Marc Lamber and James Goodnow at Fennemore Craig, P.C. in Phoenix, Ariz., are some of the first personal injury practice groups in the United States to offer this type of technology. While they haven’t actually presented these recreated VR scenarios in court, the pair wants to start applying VR in several pending cases to help the jury see the moment a catastrophic incident took place.

“We’ve always looked at technology as an area of opportunity,” Lamber told Vocativ. “When we saw VR we thought this would really facilitate reenacting what happened in an accident scene.”

Lamber and Goodnow mostly focus on catastrophic injury and wrongful death cases, but they said VR technology could be used to win any type of big consequential case — even ones that have billions of dollars on the line. They even think that the technology might have applications in criminal cases as well.

VR in cases like these could be used to recreate vehicle accidents, crime scenes, and witness simulations to help jurors see the incident as accurately as possible. An example would be a vehicle collision, in which a truck missed a red light and crashed into another car. The VR visual can show a virtual recreation of the collision and how the scene would have appeared from various vantage points.

In theory, VR could be used to recreate and poke holes in the opposing side’s argument. So if a witness at the scene of an accident were to say that the stoplight was green when the truck went through the intersection, but from where they were standing they couldn’t possibly see the traffic light, a VR simulation could recreate the scenario from that witness’ point-of-view and debunk their statement.

VR recreations or simulations have not been introduced in a U.S. court, yet, but Lamber and Goodman argue that VR is no different from existing courtroom visual aids such as blown up graphics, photos, or video. Demonstrative exhibits, regardless of their platform, should always be truthful and they have to go through different layers of fact-checking, and ultimately, the judges are the gatekeepers for what is admissible in court.

Lamber and Goodnow couldn’t disclose any details on the VR scenarios they’ve started recreating as a proof-of-concept experiment, as they’re part of pending litigation. The VR recreations have been created by Kitchen Sink Studios, a group of strategists and artists who don’t necessarily have a criminal justice background, but have all the tools required to make these scenarios very realistic.

To create the VR representations, Kitchen Sink Studios returns to the scene of the accident and reenacts the collision based on police records, victim stories, and witness statements. Once the visual is recreated the juror or judge has full control of the experience, which they can view using an Oculus Rift headset. Viewers can pause, rewind, zoom in and sometimes even reposition their vantage point by moving their head. The VR experiences are usually used to make a very specific point so the they don’t last more than 30 seconds.

“We can make it look as realistic as you see in Hollywood, pretty much,” said Gregory “Frenchy” Hedon, digital strategist and content director at Kitchen Sink Studios. “Is it always necessary? Absolutely not. Is is it costly? Absolutely yes.”

Hedon said a crime scene’s recreation cost can vary widely, and it’s not always realistic. The more details in a recreation, the more expensive it will be to create in VR. The team of strategists can take anywhere between 100 to a 1,000 hours working on one VR visual. At a rate of $150 per hour, a VR recreation can cost anywhere between $15,000 and $150,000.

“The cases in which we are using them now, we are using it experimentally,” Lamber said. “it’s something we see as a viable technology that we can use in cases and not only with judges but with jurors.”

Lamber and Goodnow said they wouldn’t be surprised if the first case using VR happens in 2017, but due to courts being backed up and the way the legal process works, VR will realistically make its appearance in a court room in two years, according to Goonow.

There haven’t been any cases that successfully use VR to win a case in the U.S., but it has been successfully used in Europe by the Bavarian State criminal office in Munich, which created a virtual reality version of the Auschwitz concentration camp to assist with the continued prosecutions. Researchers from universities such as Staffordshire in England and Institute of Forensic Medicine at the University of Zurich, Switzerland, have also published papers on how useful this technology can be in courtrooms.

“I think its brewing right now and I think it’ll break this year or next,” Goodnow said. “We are at the brink of the courts dealing with this head on.”