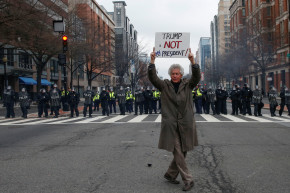 Vocativ reporter Evan Engel, who was arrested and charged while covering the protests at Trump's inauguration, has been cleared of all charges

All charges have been dropped against Vocativ reporter Evan Engel, who was arrested while covering the protests in Washington during Donald Trump’s inauguration last Friday, according to a court filing today by the U.S. Attorney in the District of Columbia. Engel was detained and charged with felony rioting, for which he faced a possible ten-year prison sentence and a $25,000 fine. Several other journalists were arrested at the protests, along with hundreds of demonstrators.

“Reporting on the protests in Washington, D.C. on inauguration day served a vital public interest,” Ben Reininga, Vocativ’s editorial director, said. “Learning that one of our journalists was arrested while on assignment served as a chilling reminder that we must never take our First Amendment freedoms for granted. We are pleased that charges against Evan were dismissed and we look forward to continuing to do our work.”

Engel was detained near 12th and L streets in Washington on the morning of January 20, where he was with two other reporters from the Vocativ team to cover protests at the inauguration of Donald Trump. A number of demonstrators reportedly broke the windows of businesses and set fire to a car, according to police reports. Alex Rubinstein, a reporter with RT America, a Kremlin-funded media outlet, was also arrested, along with several freelance reporters.

Engel was held for more than 24 hours, before being charged and released on Saturday.

“My thanks go out to all my colleagues and to the legal team Vocativ provided — as well as to everyone who reached out and shared their support,” Engel said on Friday. “Today, my thoughts are with any other journalists who are facing charges for doing their jobs, as well as with journalists imprisoned around the world.”

The Committee to Protect Journalists issued a statement earlier this week condemning the arrests. “These charges are clearly inappropriate, and we are concerned that they could send a chilling message to journalists covering future protests,” wrote Carlos Lauría, the organization’s senior Americas program coordinator. “We call on authorities in Washington to drop these charges immediately.”