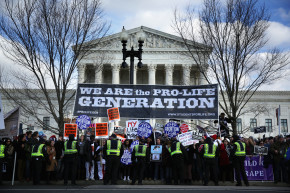 Catholic schools bus thousands of students to the annual March for Life each year, but not everyone looks back on the trip fondly

Just six days after the words “my body, my choice” echoed through the Washington Mall, a decidedly different march is coming to town. Every year, the March for Life draws anti-abortion advocates from across the country to protest Roe v. Wade, a landmark Supreme Court case that ruled unconstitutional a state law that banned abortions.

Friday’s protest included a speech from Vice President Mike Pence, an ardent pro-life supporter. As the New York Times notes, this was the first time a president or his understudy have ever addressed the march in person.

The event draws a youthful crowd, largely in part due to the thousands of Catholic school students — typically ranging from 5th grade through college — who make the pilgrimage from Mid-Atlantic states and beyond. One Catholic high school group is even making the 10-hour drive from Grand Rapids, Michigan.

March for Life “gives the kids an opportunity to see that they’re not the only ones who hold this idea,” accompanying teacher Pat Nugent told local TV.

Indeed, the day usually draws numbers in the hundreds of thousands, making it the largest annual pro-life demonstration in the world, according to March For Life organizers. And it makes sense that Catholic schools would encourage their students to go, given the Vatican’s long-held anti-abortion stance. Still, some former Catholic school marchers don’t look back on their experience fondly, saying they felt misguided and weren’t educated enough on abortion to understand the meaning behind the rally cry of “Hey hey, ho ho, Roe v. Wade has got to go!”

“I was in 5th grade when I started going to the march,” Miranda O’Shea, a 19-year-old from Staten Island said. “At that time we barely even knew what an abortion was, let alone the real meanings behind it.”

Looking across social media, O’Shea isn’t alone. We found several ex-Catholic school students, including Carleen Boyer, a 24-year-old who recently broke away from Catholicism. She remembers heading down to D.C. from suburban Philadelphia with her all-girls school at age 14.  “It was a one-sided conversation,” she said in a phone interview with Vocativ. “I remember before the march, they brought someone into our theology class and she kind of told us how to fight the arguments of the pro-choice side.”

Boyer added that despite being warned of the graphic abortion photos typically employed by staunch pro-life advocates, it still disturbed her as a preteen. “I specifically remember the graphic images used by the pro-life side,” she said. “It was this scare tactic almost, like, ‘look at this terrifying image.'”

But other Catholic school students don’t see those gruesome images as mental trauma, but life-altering moments, further inspiring them to the pro-life cause. “What struck me most was that hundreds of fathers lined the street, crying and holding signs about wishing they hadn’t had an abortion and how they missed their unborn child,” a female marcher told a local paper.

Sam, a 25-year-old who now lives in the Bronx after attending a Catholic college in the District, had a different experience. She wonders if it’s even appropriate for Catholic schools to send young teens to the march.

“I really feel for the kids under 18 [years old] that get bussed in,” she said. “I don’t really think they should go to the event until they’ve reached a point where they can decide if they want to go.”

Students aren’t always there with a genuine interest to protest Roe v. Wade. Some just want a day of class or a subsidized trip to the nation’s capital, but in Miranda O’Shea’s case, the right to walk against abortion was positioned as a privilege for getting good grades.

March for Life did not respond to a request for comment.

About six in 10 Americans think abortion should be legal in all or most cases, according to Pew, but that plurality now means little given the Republican-controlled Congress and White House. President Trump has already pulled funding from international programs that provide abortion services. As first-time march-goers will soon find out, especially young women who might’ve found themselves marching last weekend, the tone will be greatly different.

“That bias was the most concerning thing,” Boyer said. “I don’t think that 10-, 11-, and 12-year-olds can understand the complexities of abortion and the things Planned Parenthood actually offers.”

Alternate fact connoisseur and Trump advisor Kellyanne Conway also spoke at the march. The Catholic youth of America will be listening, for better or worse.