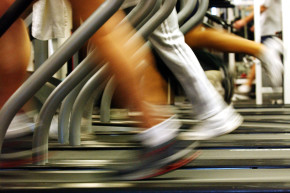 People With Gym Memberships Really Are Healthier
By Ed Cara

Chances are you've had a gym membership you haven't used. But apparently it counts for something

It’s a common enough trope — the hapless loafer who swears they’re going to change their life around any minute now by signing up for the gym, only to leave an untouched membership card discarded in the rubble of months-old pizza boxes a week later. It may come as a surprise then, according to a new study published this month in the journal PLOS One, that people with gym memberships actually do seem to be much healthier than the rest of us schlubs.

Researchers from the University of Illinois at Chicago and Iowa State University teamed up and studied 405 generally healthy volunteers, mostly recruited from the Iowa State faculty and staff. Half were active members of a health club for at least a month or longer, while the others weren’t. Not only did health club members report exercising more often than non-members, but their cardiovascular fitness, measured via a physical, was better as well.

The study, while not the only one to show a win for gym membership, is the first to demonstrate it via objective tests of cardiovascular health, according to the authors. And its findings point to a relatively easy way of getting people to stay active, an ever-important priority given that as little as 10 percent of Americans may be getting enough exercise.

“Ideally more people with active memberships would result in increased physical activity and more favorable health and fitness, as well as reduced sedentary time, which is an important and independent emerging risk factor for cardiovascular health and premature mortality,” the authors wrote.

All told, three-quarters of gym members met both the level of aerobic and resistance exercise recommended by the U.S. Health Department, compared to less than a fifth of non-members. Women seemed to benefit more than men from membership, as they were more likely to meet activity levels, as did longer-term members. Also importantly, gym members reported being just as active outside of the weight room or basketball court as non-members — meaning they weren’t compensating by being lazy on the weekends.

Strange as it might seem at first glance, gym members actually weren’t noticeably thinner than non-members. Research, however, has shown time and time again that even regular exercise doesn’t lead to significant weight loss. On the other hand, gym members were less likely to be obese, especially the longer they kept at it.

Unfortunately, the study wasn’t designed to pinpoint what sorts of exercises people were doing to stay fit. And the very nature of it can only point to a strong link between gym membership and health, rather than show a direct cause-and-effect relationship. That could mean that instead of someone becoming fit because they joined a gym, they just joined a gym because they were already fit. To know for sure which direction the link flows, we need more studies that keep track of people over a long period of time as they either join or leave a gym, the authors explained. Including a more diverse crowd of volunteers, as opposed to typically wealthier, white college employees, would also be important for future research.

Still, considering that gym memberships are getting cheaper over time and more workplaces are offering them to their peons as part of a benefits package, they do think there should be a stronger public health push to sign people up.

Currently, according to the International Health, Racquet & Sportsclub Association, around a quarter of adult Americans, or 64 million, worked out at a health club in 2015, with 55 million having an active membership.