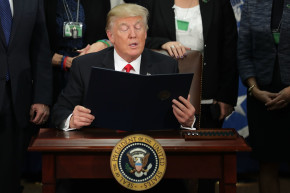 After Outcry, Trump’s Twitter Switches From Gmail To Gov Address
By Kevin Collier

After Outcry, Trump’s Twitter Switches From Gmail To Gov Address

It’s not clear when that practice began, but until sometime early Thursday afternoon, anyone who tried to tell Twitter that @POTUS was their own account would be informed of a redacted version of the Gmail address where a password would be sent. Twitter user @WauchulaGhost tweeted about this discovery earlier today.

During Trump’s 2016 campaign, he spent months condemning his rival, Democrat Hillary Clinton, for her choice to use a private email server, rather than a government one, during her tenure as Secretary of State. Many of Trump’s top advisors, including Chief Strategist Steve Bannon, Counselor to the President Kellyanne Conway, senior advisor Jared Kushner, and press secretary Sean Spicer, currently use private email accounts in their work, Newsweek has reported.

Trump’s frequent and erratic use of Twitter is unprecedented for a world leader, and has already been shown to impact the stock market, prompting fears of disaster if his account was hacked.

While the choice to use Gmail with the @POTUS account may be hypocritical given his campaign against Clinton’s email practices, it alone isn’t necessarily a bad idea from a security standpoint. Gmail’s security is considered among the best of common, commercial email services.

“I don’t see a security risk as gmail has some of the best security out there, they have the means to provide it,” Khalil Sehnaoui, founder of the cybersecurity company Krypton Security, told Vocativ, if that account is properly configured with a strong password and two-factor authentication, and isn’t used as Trump’s everyday email account.

It wasn’t immediately clear if the @POTUS handle, which belonged to Barack Obama’s White House before being formally transferred to Trump’s administration during the presidential transition, had used a Gmail account with @POTUS.

But the mockery did work. Sometime around 1:00 on Thursday, someone in control of @POTUS switched its associated email account to what appears to be one with a White House domain.