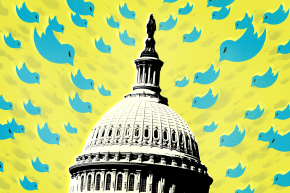 The Rise (And Possible Untimely Fall) Of Rogue Government Twitter

The resistance may not be tweeted after all

Over 40 “rogue” Twitter accounts sprang up earlier this week after the Trump administration reportedly imposed gag orders on several federal agencies. The users behind some of these accounts, such as AltYellowstoneNatPark and AltEPA, claim to be employees of the agencies and sites they are representing, while others acknowledged that they were not associated with the entities they have decided to represent.

The accounts quickly became a viral sensation, sending out sassy messages of dissent, underscoring the truth about climate change, sharing support for the people of Standing Rock in the face of the now imminent Dakota Access Pipeline, and promoting the planned Scientists’ March On Washington.

In the short time that these accounts have sprung up, they’ve amassed massive followings. @AltNatParkSer, he largest “unofficial ‘resistance'” account for the National Parks Service has over one million followers as of Thursday morning, more than two and a half times that of the actual agency account.

These accounts popped up when Interior Department employees were ordered to stop tweeting to its account after the National Park Service retweeted a side-by-side photo that showed a smaller crowd at Trump’s inauguration compared to Obama’s inauguration in 2009, according to an AP report.

But already, some of those manning the rogue accounts announced that they are relinquishing control to “non-federal workers” for fear of losing their jobs.

We have decided to pass over control of this account to individuals outside of government employment for the sake of our colleagues.

We have taken over the group and will continue to run this account, advocating scientific and environmental interests.

They've passed control of the account to non-federal workers to be on the safe side. We are considering the same. https://t.co/Zfm9hpElNn

Under the Hatch Act, which the “Rogue NASA” account is citing as its reason for passing ownership on to people who are not NASA employees, it is illegal for members of the federal workforce to engage on “partisan political activity on official duty time; on federal property; while wearing a uniform or insignia identifying them as federal officials or employees.” Other concerns have been raised over the fact that many of these “alt” or “resistance” accounts bear the official logo of the department they are identifying without proper authorization.

To prevent Hatch Act violations, ownership of this account has been given to two people who are not employees of the federal government.

In an apparent effort to ensure they are not in violation of Twitter’s impersonation policy, many of these account holders have been adding language like “not official” and “not affiliated” to their bios.

“It’s not up to the administration to censor scientific research,” a person claiming to be a writer working in tandem with three mid-level and senior climate change scientists with the EPA for the @ActualEPAFacts told Vocativ over a Twitter Direct Message.

The account was created Wednesday morning, following the previous days’ reveal that the Trump administration prohibited the EPA staff from putting forward any press releases, blog updates, or posts to social media accounts. This media blackout followed the removal of all mentions of climate change from the White House website on the day of President Trump’s inauguration.

While the alleged EPA employees say they are worried about their identities being revealed, they say that they do not plan on stopping, and are prepared to leak information pertaining to scientific research conducted by the agency in the future if necessary.