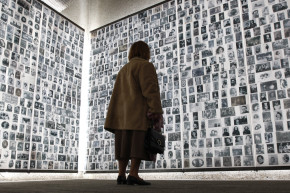 Just after her own birth in 1942, Tova Taitelbaum and her mother fled the Jewish hospital in Bratislava, Slovakia to escape the expected deportation of mothers and their babies to a concentration camp. On Friday, 75 years later, Taitelbaum has published a book about her childhood growing up in war-time Slovakia. In it, she honors her father’s decision to build a basement underneath their home in which to hide Jewish orphans, before ultimately being sent with her mother to a labor camp.

Ahead of International Holocaust Remembrance Day on January 27, Taitelbaum’s mission to share her story, as well as those of a rapidly disappearing generation of Holocaust survivors, comes amid a wave of social media-empowered conspiracy theories that assert the Holocaust did not actually happen.

“What is very upsetting is that [Holocaust deniers] are using Holocaust terminology against us,” Taitelbaum said, referring to the fact that deniers make use of survivors’ testimonies as “evidence” that the Holocaust was actually an elaborate fabrication. “I don’t know what to do about it, I’m a very small wheel in the cog,” Taitelbaum, along with her son and husband, told a group of diplomats in a briefing on Thursday in Jerusalem on the legacy of the Holocaust and Nazism. Taitelbaum lives in Israel, a country “created, thank God, to be the Jewish homeland following the war,” she said.

Modern Holocaust denialism manifests in tens of thousands of social media posts that call the Holocaust yet another facet of “fake news.” Self-described historians and researchers take to the internet to “expose” the lies of the Holocaust and claim that like other more recent events such the 2012 Sandy Hook elementary school shooting or 9/11, it was orchestrated by Jews seeking world domination. Posts under titles like “Holohoax” and “6,000,000 Lie$” gather the “evidence” and illogical conclusions as to why the systematic killing of 6 million Jews is an exaggeration. “If #NAZIS wanted to Kill ALL #Jews Why Put them In camps? Why Feed them? #Holocaust is a LIE,” a typical tweet goes.

Many online Holocaust deniers are millennials at ease with the confessional-style webcam format of Youtube. But they also use social media as a platform to promote old-school truthers like 78-year-old English Holocaust denier David Irving, who has for decades used pseudo-scientific arguments in an attempt to disprove that Jews were gassed to death at Auschwitz.

Today, Irving claims that the decades-old videos which are now amassing tens of thousands of new viewers have translated into a new and young online following.

“I’m getting messages from 14-, 15- and 16-year-olds in America. They find me on YouTube. There are 220 of my lectures on YouTube, I believe, and these young people tell me how they’ve stayed up all night watching them,” Irving recently told the Guardian. “They get in touch because they want to find out the truth about Hitler and the Second World War. They ask all sorts of questions. I’m getting up to 300 to 400 emails a day. And I answer them all. I build a relationship with them.”

The revival of Holocaust denialism correlates with unprecedented levels of distrust in American institutions. The movement has also received a megaphone to the mainstream American audience and with the rebirth of white supremacism seen alongside Donald Trump’s presidential campaign. Trump has offered divisive and racially loaded messages on the issue. He has been criticized for enabling and inspiring the rise of white supremacy groups who target Jews along with Muslims, the LGBT community, and other minority groups, and been lambasted for not doing more to stem the proliferation of hate speech.

In March, Vocativ unearthed a YouTube video that shows Matthew Heimbach, who the Southern Poverty Law Center calls “the face of a new generation of white nationalists,” talking about Trump as the inspiration to mobilize “millions of people with our message of European culture of faith, family, and folk—and solidarity—that the Republicans could never reach.”

Anti-Semitism is making headway again, and in the more 800 reported anti-Semitic tweets against Jewish journalists during the 2016 election season, it has become common practice to include Holocaust taunts in part of a wider humiliation strategy.

Journalist Julia Ioffe was bombarded by social media trolls who showed her in a striped concentration camp uniform after she wrote an unflattering profile of Melania Trump in GQ magazine. Melania responded that the social media reaction was “provoked,” rather than denounce the onslaught.

.@GideonResnick @OKnox Oh, I thought this one reminding me to swallow my diamonds was from you! pic.twitter.com/Ri6tZsyHXx

“The alt-right and far-right have always been steeped in anti-Semitism, but with the election over the past months, we’ve seen that all inhibitions have faded away, people who were once afraid to come out are no longer.“ said Andre Oboler, CEO of the Online Hate Prevention Institute (OHPI), an Australian-based organization. “What is now known as the ‘alt-right’ spent years if not decades promoting Holocaust denial on places like 4Chan and Reddit, now they’ve graduated to fake news, a network of blogs and websites that alter search results, and mainstream social media platforms like Facebook.”

The group’s research finds that out of the tens of thousands of posts denying the Holocaust, Facebook has a 58 percent removal rate, compared with the 20 perecent for Twitter and 10 percent for YouTube.

“The mere statement of denying the Holocaust is not a violation of our policies. We recognize people’s right to be factually wrong about historical events,” wrote Facebook public policy director Richard Allan in a letter to Oboler that was published on the OHPI website. “Many of the team at Facebook have direct personal connection to the Holocaust, through parents or grandparents who were forced to flee Europe or relatives who could not escape,” he added. “We believe in Facebook’s mission that giving people tools to make the world more open is the best way to combat ignorance and deception, though we recognize that others may disagree.”

The character of Holocaust denial has also morphed alongside social media, focusing less on the fact and more on the classic tropes of Jews seeking world domination, said Jonathan Vick, associate director of the Cyberhate Response team of the Anti-Defamation League, an international Jewish NGO.

“Anti-Semitism in connection with the election was amazing in that it was a go-to argument for people, and that potentially desensitizes people by turning the Holocaust into a sort of dialogue mechanism,” he said, explaining that anti-Semitism and the Holocaust have crept into the dialogue in new ways, and are now being referenced casually by people who apparently don’t even understand its meaning.

Social media sites broadly claim that they are only platforms, and thus do not have the right to police their content. But they’ve also spurred controversy when reports showed that they manipulate algorithms out of both monetary and ideological motivations.

In December, Google reportedly altered its algorithm for the query, “Did the Holocaust happen,” in response to backlash from journalists who found that the query yielded as its first search result the post of the white supremacist site Stormfront’s, “Top 10 reasons why the Holocaust didn’t happen.” Google’s move followed another controversy that the highlighted the search engine’s tendency to auto-complete with racist and sexist suggestions. “Are Jews” led to “Are Jews evil.”

Holocaust denial flourishes on the small, but still pervasive-scale, as most of the world has failed to condemn and adopt effective strategies for countering Holocaust denial.

“Governments throughout the world haven’t been willing to go out and say clearly what the truth is historically and who is responsible, and let’s try and stick to the truth,” said Efraim Zuroff, head of the Jerusalem office of the Simon Wiesenthal Center, an organization that has tracked down Nazi war criminals and brought them to trial. It’s not enough, he said, that officials around the world remember the Holocaust. They need to also take a stronger hand against denialism in all its forms. He added that the problem is becoming more severe as the Holocaust survivor population dies out, on an average of 14,200 deaths each year.

Facebook’s lax hate-speech policy has met resistance in countries like Germany and Austria, where Holocaust denialism is illegal along with Nazi symbols. But even there Holocaust denial can find a way, as users who wish to evade the monitors tend to send their content to friends to publish outside of the country, said Oboler, the online hate speech expert.

“These companies generally engage when there’s some sort of media attention,” he said. “But we need to remember that these are not some project run out of some garage. Facebook, Youtube, Twitter, they’re all huge organizations which should be held accountable.”