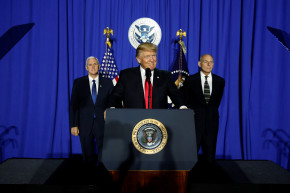 ‘Taking The Oil’ Would Not Have Stopped ISIS. It’s Also A War Crime
By Jamie Tarabay

‘Taking The Oil’ Would Not Have Stopped ISIS. It’s Also A War Crime

President Trump argued that had the U.S. "taken the oil," there'd be no ISIS. That's not true.

Ever since the U.S. formally withdrew its combat troops from Iraq at the end of 2011, a blame game has played out over who owned the calamitous security vacuum that followed, stretching into last year’s presidential campaign and now into the new White House administration.

Speaking in an interview with ABC that aired Wednesday, President Donald Trump argued that the U.S. should have “taken the oil” as recompense for the billions of dollars the U.S. spent in Iraq, insisting that had it done so, the Islamic State would never have existed.

“We should have taken the oil. You wouldn’t have ISIS if we took the oil. Now I wasn’t talking about it from the standpoint of ISIS because the way we got out was horrible. We created a vacuum and ISIS formed,” Trump said. “But had we taken the oil something else would’ve very good happened. They would not have been able to fuel their rather unbelievable drive to destroy large portions of the world.”

In the lead up to the invasion of Iraq, officials in the George W. Bush White House argued that Iraq could essentially pay for its own reconstruction out of its own oil revenues, once the country was freed from the shackles of Saddam Hussein’s dictatorship and international sanctions were lifted. In fact, Iraq’s oil industry had been so badly damaged during the years of international isolation and a near-decade of war with neighboring Iran, that those expectations were soon hobbled by the reality that would demand investment into repairing the weakened oil infrastructure.

And even had the oil economy been operational from Day One after Saddam was removed from power, international laws enshrined in the Geneva Convention prohibit an occupying power from removing capital or property and state it should act rather as the administrator and safeguard that nation’s assets.

“We should’ve taken the oil,” he insisted. “And if we took the oil you wouldn’t have ISIS. And we would have had wealth. We have spent right now $6 trillion in the Middle East. And our country is falling apart.”

In truth, the origins of ISIS had formed shortly after the U.S.-led military invasion of Iraq. The Jordanian terrorist Abu Musab al-Zarqawi formed an al-Qaeda affiliate in the summer of 2003 that carried out spectacularly deadly bombings in Baghdad, including the August 7, 2003 attack on the Jordanian embassy, and the strike on the headquarters of the United Nations that killed 22 people, among them the United Nations’ Special Representative in Iraq Sérgio Vieira de Mello. On August 29 of that year, over a hundred people, including a revered Shiite Ayatollah, were killed in a bombing in the holy city of Najaf.

Zarqawi was killed in an air strike in Iraq in 2006, but not before a sectarian war had erupted between Iraq’s Shiites and Sunnis that essentially culminated in the birth of the Islamic State in 2014. For years before ISIS declared its own caliphate it had been operating in the north of Iraq, especially in Mosul, and funding itself through criminal rackets, including blackmailing local residents. It drew oil wealth from Syria, wracked by war itself, and sold it on the black market. Once it officially took over Mosul, ISIS plundered the central bank, making off with over $500 million in cash and gold. Afterwards, it found new sources of funding through the demand of millions of dollars in ransoms for kidnapped foreigners.

There are many arguments over how ISIS might have been incapacitated before it became the terror organization it is today, having spanned affiliates around the world, and directed terror attacks across continents. U.S. military commanders on the ground in Iraq at the time struggled to convince Iraqi politicians to embrace reconciliation rather than intensify sectarian rivalries and deepen old wounds. Pleas to include more Sunnis in security forces ranks were ignored. Shiites, long persecuted under Saddam, climbed to power and filled government positions and retaliated against Sunnis who’d once served in the old regime and refused to accommodate Sunni politicians’ appeals for cooperation and in many cases, revenue for provinces and municipalities in Sunni neighborhoods.

Internal politics demanded an end to the U.S. military presence, Iranian influence was strong and as long as the U.S. was considered to be an occupying power, its troops would always be under attack. Iraq’s government refused to renew the status of forces agreement that would ensure U.S. and coalition troops could remain in country and immune from local laws. It was in this atmosphere that ISIS’ earlier form — al-Qaeda in Iraq — thrived, maintaining a steady drumbeat of attacks against Iraqis, seeking to disrupt as much as possible any sense of normalcy or stability.

As then Iraqi Prime Minister Nouri al-Maliki’s grip on power began to slip, Abu Bakr al-Baghdadi and cohorts from Saddam’s deposed regime sensed an opportunity and took it, destroying the border between Syria and Iraq, overwhelming Iraqi security forces policing the city of Mosul, and watched as they abandoned their uniforms and their weapons to flee. The Islamic State then showed its hand. Contrary to Trump’s claim, ISIS didn’t form out of a security vacuum after U.S. troops had gone. It had been there, working in the shadows all that time.