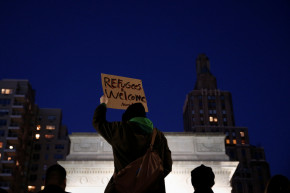 President Donald Trump is on Thursday expected to act on one of his signature campaign promises — restricting immigration from a number of Muslim-majority countries. In response, demonstrators gathered in New York City on Wednesday evening to protest Trump’s policies.

Trump’s plans include temporarily banning most refugees and suspending visas for citizens coming from Syria and six other Middle Eastern and African countries. One such protest against these restrictions took place in New York City’s Washington Square Park. Organized by the New York branch of the Council on American-Islamic Relations (CAIR), the demonstration kicked off at 5 p.m. “We are here today to let everyone know that our solidarity, our strength lies in our diversity, and our mission is to make sure that everyone receives justice, and that this is truly an indivisible nation,” Afaf Nasher, CAIR-NY’s executive director, told a crowd of hundreds of demonstrators.

Chants of “No ban, no wall, New York is for all!” and “This is what America looks like!” filled the air, as people gathered near the park’s famous arch. “I’m here because I don’t want friends and family to not be able to come here, or have people here not be able to visit their foreign families back home,” said Sahib Awan, a 29-year-old of Mexican and Pakistani heritage “I have friends that are Yemeni, or what have you, but if this goes through, they wont be able to see their families. No country should ban people from seeing their families.”

His fiancé, Ariana Witt, echoed Awan’s concerns. “I’m just thinking about our kids. Our kids will conceivably be everything this man hates, as a black woman marrying a Mexican-Pakistani,” she said. “I’ve been thinking about that since the beginning of this, before the primaries. We’ve been worried about it for too long.”

Shant Melkonian, a language lecturer at New York University, told Vocativ that attended the protest to support his students who are not from the United States. “I work at NYU, and I have a lot of international students…I’m here to keep this up and help keep the momentum going against his policies,” he said. “Sanctuary cities will be penalized, and the administration is going very heavy in a right wing policies. Everyone’s out here protesting, and hopefully in two years during midterm elections we can get some of these right-wing governors out and get some more sane policies going.”

Ibrahim Hooper, CAIR’s national communications director, told Vocativ prior to the protest that although the council’s national arm didn’t organize the event, he supported any demonstrations around the country that were against Trump’s anti-immigrant policies. “I think it’s a very encouraging sign that these rallies and other forms of opposition to these executive orders are springing up around the country,” he said. “It sends a positive message at a time when we’re getting very negative messages from the Trump administration. And just as we saw on Saturday with the hundreds of thousands, and maybe millions of people worldwide marching for social justice in an almost spontaneous way.”