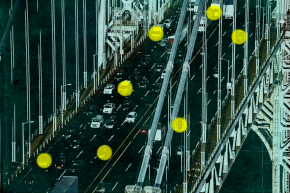 The state of New York has privately asked surveillance companies to pitch a vast camera system that would scan and identify people who drive in and out of New York City, according to a December memo obtained by Vocativ.

The call for private companies to submit plans is part of Governor Andrew Cuomo’s major infrastructure package, which he introduced in October. Though much of the related proposals would be indisputably welcome to most New Yorkers — renovating airports and improving public transportation — a little-noticed detail included installing cameras to “test emerging facial recognition software and equipment.”

“This is a highly advanced system they’re asking for,” said Clare Garvie, an associate at Georgetown University’s Center for Privacy and Technology, and who specializes in police use of face recognition technologies. “This is going to be terabytes — if not petabytes — of data, and multiple cameras running 24 hours a day. In order to be face recognition compliant they probably have to be pretty high definition.”

Cuomo’s office didn’t respond to multiple requests for clarification in the ensuing weeks after his announcement. But a memo from the Metropolitan Transit Authority’s Bridges and Tunnels division, obtained through a Freedom of Information Act request, shows that on December 12, the MTA put out a call to an unknown group of private vendors of surveillance equipment. The proposed system would both scan drivers as they approached or crossed most of the city’s bridges and tunnels at high speeds, and would also capture and pair those photos with the license plates of their cars.

“The biggest risk that comes with a system like this is its ability to track people, by location, by their face,” Garvie said. “So what needs to be put in place is a prohibition on the use of these cameras and the technology as a location tracking tool.”

The proposed system would be massive, the memo reads:

The Authority is interested in implementing a Facial Detection System, in a free-flow highway environment, where vehicle movement is unimpeded at highway speeds as well as bumper-to-bumper traffic, and license plate images are taken and matched to occupants of the vehicles (via license plate number) with Facial Detection and Recognition methods from a gantry-based or road-side monitoring location.

All seven of the MTA’s bridges and both its tunnels are named in the proposal.

New York City is home to more than 2,000 bridges and tunnels, which are owned by various agencies, including the New York City and state’s Departments of Transportation and Amtrak. It’s unclear as of this writing if those “crossing points” are similarly considering surveillance technology, though Vocativ has filed FOIA requests to each of them. Cuomo’s office didn’t respond to multiple inquiries. It’s similarly unclear how many, or even if any, private surveillance companies responded to the MTA’s proposal. A followup memo on Dec. 23 extended the deadline for submissions until Jan. 3, indicating the MTA wasn’t satisfied with the initial round of proposals.

New York City wouldn’t be the first in the U.S. to have a network of facial recognition cameras for law enforcement. In 2013, for instance, the Los Angeles Police Department admitted it had deployed 16 cameras equipped with face recognition software, designed to search for particular suspects. But the most prominent known system is in Moscow, which attempted to pair hundreds of thousands of CCTV cameras with advanced facial recognition software by NTech Labs — the company behind the infamous FaceFind software, which can let Russians stalk people whose picture they snap by using the program to find their social media accounts.

Moscow’s system has been beset with problems, though, especially because CCTV cameras are designed to move with subjects, reducing image quality, and because they’re normally mounted above people’s heads.

“The findings from phase one of the pilot are that it’s remarkably inaccurate,” Garvie said. “This is the most advanced system we’re aware of, but it’s having a very hard time in real-world conditions of people walking.”

That indicates that an effective system like the one the MTA has called for might still be years away.

“The New York crossings project is talking about people driving at highway speeds, so I think we can expect very, very low accuracy rates,” Garvie said.