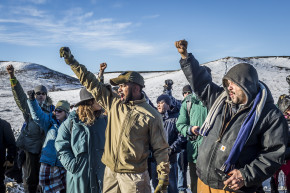 Police Are Making It Impossible To Use Drones To Document Protests

Last November, an aerial drone flown by a member of the resistance camp opposing the Dakota Access Pipeline captured dramatic footage of riot police blasting crowds with water cannons as temperatures dipped below freezing, sending 17 of the camp’s occupants to the hospital with injuries and hypothermia.

The video quickly spread on social media, spurring global news coverage of the fight against the oil pipeline, which saw activists clash with police and security forces in tense standoffs last year. A few weeks later, the Army Corps of Engineers halted construction of the pipeline, which had encroached on Native American sacred lands and threatened water supplies near North Dakota’s Standing Rock reservation.

It was another example of how drones have become a crucial technology, allowing activists and journalists to document protests and hold police accountable for abuses. But as a new era of civil resistance dawns under the Trump administration, at the Standing Rock site and in anti-Trump demonstrations across the country, drone experts say police and government have made it unnecessarily difficult — sometimes impossible — for civilians to deploy drones at large protests.

Just a few days after the video from Standing Rock went viral, the Federal Aviation Administration (FAA) gave permission to local authorities to effectively ban all civilian drone flights in 4 mile radius above the Oceti Sakowin resistance camp and drill site. The same thing happened two years earlier, during the civil unrest in Ferguson, Missouri: Police were granted what is called a Temporary Flight Restriction, or TFR, which legally restricts airspace above a designated area to law enforcement and emergency aircraft. In Ferguson, the explicit goal was to stop news helicopters and drones from observing the Black Lives Matter protests, where cops were firing tear gas and menacing protesters with military vehicles and weapons.

While these ad hoc no-fly-zones are ostensibly created for air safety reasons, like clearing the way for rescue helicopters during a natural disaster, some drone journalists say law enforcement are abusing them as a way to block news coverage.

“The main problem is the FAA is not supposed to grant TFRs to law enforcement just because they ask for them, and yet that’s pretty much what they do,” said Robert Levine, a Minneapolis, Minnesota-based photographer and drone pilot. “Once you put up a TFR over a news site like in Standing Rock, you’re de facto criminalizing the drone pilots who were there covering news events.”

Temporary Flight Restrictions have been around forever, but it’s only recently that they’ve been used at large protests and disrupted citizen drone users. Once a TFR is in place, citizen pilots need to apply for a waiver before flying, in addition to having obtained a license from the FAA under its rules for small unmanned aircraft.

Last December, Levine was the only civilian pilot to be granted a waiver to legally fly in the restricted airspace over Standing Rock. At the time, Forbes described the waiver as a “dramatic reversal” by the FAA, which six months earlier had released long-awaited rules for the commercial use of small unmanned aircraft.

Even with the waiver, its restrictions made it practically impossible for Levine to get any useful footage, he said. Rather than granting him access to the entire 4-mile restricted zone, Levine was limited to only a half-mile radius centered around a pre-determined point. He also couldn’t fly over crowds or at night, and needed to report in to local authorities before and after every flight.

“Even with a really judiciously placed center point for my waiver, I wouldn’t have been able to cover the two main areas of news interest,” Levine told Vocativ. Those two locations are the oil pipeline’s drill pad and Backwater Bridge, where many clashes occurred between residents of the Oceti Sakowin and Sacred Stone resistance camps and police and security forces.

The waiver also took several days to get approval. And if Levine had applied to fly his drone after dark, when the police had deployed water cannons, the process would have taken even longer.

Matt Waite, a professor who heads the University of Nebraska-Lincoln’s Drone Journalism Lab, said Levine’s case is especially telling because it should be relatively easy for drone operators to get access to a remote, sparsely-populated area like Standing Rock.

Getting approval to fly drones over protests in metropolitan areas, like at the Women’s Marches that took place across the country following Trump’s inauguration, would have taken weeks or months, he said. The pilot would also have to be much more careful not to fly over crowds. And even if the area hasn’t been given a special flight restriction, some cities are covered in large swaths of permanently restricted airspace due to nearby airports.

“For breaking news, that’s not workable,” Waite told Vocativ. “If a spontaneous protest were to break out, I’d have to wait weeks.”

Waiting is also not an option for activists, who rely on independent citizen journalists to hold police accountable during demonstrations. That means more pilots will be flying illegally in the future, and if the past is any indication, police will respond with force — sometimes by shooting drones down. At Standing Rock, police fired bean bag rounds to take down drones, Levine says. But several companies are now offering “drone guns” that allow police to jam a drone’s radio signal, force it to land, or take control of it outright.

“It was law enforcement that was creating the dangerous situation out there [at Standing Rock],” Levine says. “If the FAA is concerned about safety, wouldn’t it have been better to send a representative out there to talk to those drone pilots?”

Not all pilots will play by the FAA’s drone rules, which are still less than a year old. But Waite says the agency must create a better system for drone pilots to get legal access to restricted airspace – whether it’s for flying in a temporary “no drone zone” over a protest, like Levine did, or for general news-gathering and recreation.

“What really needs to occur is the process for granting access to airspace needs to become more automated. Why shouldn’t I be able to pull up my smartphone, tap into an FAA app, and get on-demand access to the airspace?” Waite told Vocativ. “It’s not gonna stay this way forever, but the basic problem here is that the FAA’s system and their culture is still built around manned aviation.”