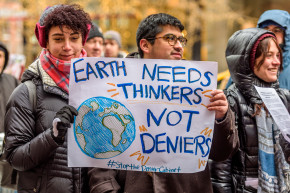 Scientists’ March On Washington Set For April 22
By Alasdair Wilkins

Update: The organizers have announced the date of the March for Science in Washington, D.C. The original story from January 25 is below, with minor revisions to reflect this news.

On Monday, a college student started a Facebook group calling for a march on Washington in support of science. On Tuesday, the group had fewer than 10 supporters, and the march was little more than an idea shared by a few likeminded individuals. On Wednesday, the group had more than 370,000 members — up to 800,000 by the beginning of February — with the initial organizers promising they would turn the idea into reality.

In an email to Vocativ, organizers Jonathan Berman and Caroline Weinberg said their motivation for the march was straightforward: “Scientists worldwide have been alarmed by the clear anti-science actions taken by the Trump administration,” they wrote. Berman is a postdoctoral fellow at the University of Texas Health Science Center San Antonio. Weinberg has a medical and public health background and is now a science writer in New York. (She has written three articles for Vocativ as a freelancer.)

“It has been less than a week and there have already been funding freezes and efforts to restrict scientists from communicating their findings (from tax-funded research!) with the public,” they said. “These actions are absurd and cannot be allowed to stand as policy.”

These comments refer to the Trump administration’s efforts to freeze all of the Environmental Protection Agency’s grants and contracts and institute a gag order on scientists at various government agencies. In news on Wednesday, the Associated Press reported that political staff will now also review all of the U.S. EPA’s scientific reports and data before their public release, outraging scientists further.

The Facebook group includes scientists, concerned citizens, and more than a few people who work for the government as either employees or contractors — which explains why the group is now secret and invitation-only, though a public page also exists. Even so, the group has already grown beyond all original expectation, much as the recent Women’s March went from a Facebook event created by a Hawaii retiree to a global movement of more than 2.5 million people. The hashtag #ScienceMarch offers a public record of people’s motivations for getting involved.

I am going to the #ScienceMarch because teaching science and investing in science is the only way for a country to have a future.

I support #ScienceMarch. I am alive today because of science.

Before the organizers set the official date, several posters in the Facebook group suggested March 14 or April 22 — Pi Day and Earth Day, respectively — as natural choices, with the latter eventually being the organizers’ choice. Berman and Weinberg told Vocativ the planning is still in the very early stages and that they are in the process of meeting to flesh out just what, and who, the march will represent. Taking a lesson from the Women’s March, which was critiqued early for a lack of diversity, those behind the scientists’ march say they have brought in experienced organizers and a diversity committee to ensure all are represented.

“Diversity in science — both in the researchers who participate and the topics we are focused on — is a critically neglected area,” Berman and Weinberg said in their email. “We fully intend to emphasize diversity in both the planning of and mission statement for this march.” The march’s explanatory page specifically mentions “science is done by POC, women, immigrants, LGBTQ, indigenous people, people of all beliefs and non-belief.”

While the main group is working toward an eventual march on Washington, several additional groups have already sprung up to offer more local solidarity with the cause. A likely non-exhaustive list of the supporting groups include cities and college towns from Boise to West Palm Beach and from Tucson to Boston, as well as statewide groups like those in Minnesota and Oklahoma. These groups are still small in number, but they offer some concrete sense of the national — international, with Vancouver included — scope of the march represented by the more than 800,000 people in the main group.

The march’s purpose can’t be separated from the actions of the Trump administration, but the explanatory page doesn’t mention the 45th president by name. The aim, according to the organizers, is to march in support of empirically demonstrated, apolitical realities like global warming and evolution. That the Republican Party has politicized the discourse around science doesn’t change those facts.

“This is not a partisan issue — people from all parts of the political spectrum should be alarmed by these efforts to deny scientific progress,” Berman and Weinberg told Vocativ. “Scientific research moves us forward and we should not allow asinine policies to thwart it.”