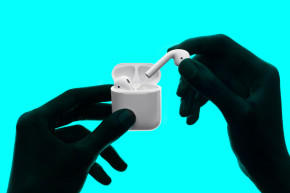 The new feature will come with the iOS 10.3 update

Apple’s AirPods have been out for a month, but aside limited availability, the biggest concern with them is that they’ll get lost almost immediately. Some app developers tried fixing the problem, but Apple quietly banned their app from the Apple Store — probably because it was creating its own.

AirPods are Apple’s wireless headphones made mandatory with the release of the iPhone 7, which has no headphone jack. The small,1.6-inch buds are easy to misplace, and some users on social media are already reporting losing them:

How do I find my airpods? Is there an app? I lost the whole thing somewhere in the house. #lostairpods #findmyairpods #apple

@AppleMusic airpods need a search function please! My bf and I both lost our airpods with no way of recovering. And the waitlist is so long!

I LOST ONE OF MY AIR PODS

The next iOS update for the iPhone will come with a “Find My AirPods” feature, which will guesstimate your missing earbud’s location based on the last time it was recognized by the Bluetooth signal — which usually has a range of 16 to 30 feet. The feature will be integrated in the existing “Find My iPhone” app and will work similarly by plotting the buds on a map. “Find My AirPods” will also make AirPods ring an alarm if they’re lost within Bluetooth range and have enough charge. So, if you’re at home you’d be able to find them easily.

The feature seems great, but it’s also very similar to what third-party app “Finder for AirPods” offered before it was removed from the App Store earlier this month. The app developer said Apple “didn’t like the ‘concept’ of people finding their AirPods and hence [the app] was deemed ‘not appropriate for the App Store.” Apple has yet to comment on the removal of “Finder for AirPods.” For $3.99, the app would have given consumers an approximate location of missing AirPods based on a Bluetooth signal.

“Find My Airpods” might not be original, but at least it’s free and helps users avoid having to pay $69 to replace just one, or spend another $159 to buy both buds.

The new feature is available with the iOS 10.3 update, which is currently in beta and can be downloaded now with a beta testing subscription. The iOS update will also come with a restructured App Store comment section and the ability to rate apps without being redirected to the App Store.