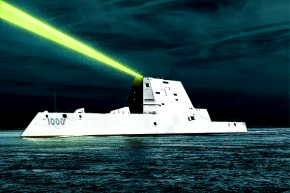 Super Laser Weapons Are Coming To Navy Ships By 2018

It only took 43 years of development

The United States military has been working on laser weapons for decades, but now we finally have a sense of when Navy ships will start using super lasers on enemy targets — by 2018.

Laser weapons aren’t a new defense technology — the Department of Defense (DoD) first shot down a drone with a laser 43 years ago. At the height of the Cold War, the US military believed that lasers could help them get an edge on the Soviets, and President Kennedy approved heavy funding for laser research. In 1968, DoD’s research arm, ARPA (now DARPA), began the project Eighth Card, with the aim of putting laser weapons on US Air Force aircraft. The name was a poker reference — lasers, they believed, would be the “eighth card” that would give them the winning hand. The first successful test took place at Kirtland Air Force Base in New Mexico in November 1973 when a large machine mounted on the ground beamed a laser at a MQM-33B drone, causing it to split into pieces.

But it took decades to develop the technology to the point where a laser weapon could be powerful and compact enough to fit onto a ship or a plane. It wasn’t until a US Navy demonstration in 2013, that the DoD finally started touting lasers as a viable weapon against fast-moving crafts and missiles.

Now it seems, the Navy is finally preparing to put super laser weapons on destroyers and cruiser warships.

This month at the Surface Naval Association national symposium, Rear Admiral Ronald Boxall, director of Surface Warfare Division, spoke of the Navy’s plans for laser technology implementation. According to the military news site Scout Warrior, Boxall said the Navy intends to shoot a 150-kilowatt laser from a test ship within the next year. “Then a year later, we’ll have that on a carrier or a destroyer or both,” he said.

That wattage could light 2,500 standard lightbulbs. A single laser beam of that much power is enough to take down an aircraft.

But a more powerful beam means the vessels carrying the weapon would need to be able to supply more charge. “The Navy will be looking at ships’ servers to provide three times that much power,” Donald Klick, director of business development for DRS Power and Control Technologies, told Scout Warrior. “To be putting out 150 kws, they [the laser systems] will be consuming 450 kws.”

Most ships can’t support that kind of power, so lasers would require extra stored energy. DRS Power and Control Technologies is developing an specialized energy source for the Navy’s lasers. Klick said their system is currently capable of supplying more than 100 laser shots on a single charge.

The weaker LaWS beams demonstrated in 2014 cost about 59 cents per shot. The DoD hasn’t announced a price tag for the new 150-kw super laser beams, but it will certainly be cheaper than surface-to-air missiles, which generally cost somewhere between $115 thousand and $1.5 million each. It’s a price cut that was four decades in the making.