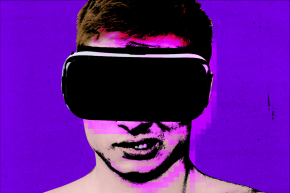 Directors say VR presents male performers with unique challenges — from weird positions to one-take shoots — and, even among seasoned talent, very few can rise to the occasion

But his erection continues despite the awkwardness of his position. It doesn’t matter that he can barely see his co-star, who is kneeling at his feet, her long blonde mermaid hair spilling over her bare shoulders. No matter that he has been instructed to refrain from touching her and avoid any thrusting during sex, or that he is closer to the hulking arm of black metal floating above him than the human woman in front of him — his boner doesn’t seem to mind.

Male performer Mike Mancini experienced this first-hand on a VR P.O.V. shoot. “I couldn’t keep wood,” he said. “I couldn’t keep it up.” This was largely because he was prohibited from doing two of the things he enjoys most: “I love to kiss, I love eye contact,” he explained. Given that he believes VR is the future of the industry, Mancini was determined to conquer the medium. So, he did what any athlete would do after a big loss: He trained. Cue: an X-rated version of the “Rocky” sequence. For a couple months, Mancini routinely invited women over to his apartment to practice. To simulate the VR filming experience, he would have them blindfold him and tie his hands together so that he couldn’t touch them. “I basically had her try to get me hard,” he said. “It was definitely a challenge for me.”

Eventually, he felt ready and signed on for his next VR shoot — and it was a success. “Now I feel very confident about VR scenes,” he said.

Shy Love, who is also Mancini’s agent, began directing VR content eight months ago. In the very beginning, she hired 12 different men for P.O.V. shoots — and, within one week, she had to fire all of them and temporarily shut down production. “I’m talking about really good male talent … and they just couldn’t get hard for VR,” she said. “It was literally every two seconds up down, up down, up down.”

The biggest difficulty, she said, is that many male performers are visually stimulated and need to be able to see their co-star to stay aroused. It doesn’t even matter if they use Viagra, which has become a commonplace backup tool for men in the industry. “It does not work. What most people don’t realize, yes, Viagra is a stimulant to help yourself get a hard-on, but what they don’t realize is it’s a stimulant that still works with actual feelings. So, just because a guy takes a Viagra doesn’t mean he’s going to walk around with a hard-on.”

Another challenge is that, at least for Love’s shoots, any cuts in the action are extremely expensive. That is because she is filming 360-degree videos using 14 different cameras, and the image from each camera has to be stitched together with the next for a seamless VR experience. This amount of editing is time-intensive and costly — and any cut only adds to that time. It can also take the viewer out of the scene. That means there’s a tremendous amount of pressure on performers to be able to complete the scene with very few, if any, breaks.

That’s not to mention the challenging, back-breaking scenarios Pierce describes — for example, maintaining an erection while kneeling on an ottoman and doing a backbend to make room for the camera in front of his face. “It’s very uncomfortable,” he said. “I’m in this, like, yoga pose kinda thing … my leg was beyond numb, it was starting to physically hurt.” His only explanation for why he’s able to perform under these circumstances is, “I really love pussy, a lot.” Shreddz says he’s able to overcome the challenge of not seeing his co-star by conjuring a sexy image in his mind. “If I can get something visually in my head, if I can’t see, I can stay hard just with the mental thoughts.”

It’s worth noting that male P.O.V. VR shoots are also more challenging for the female performers. DeVille, Shreddz’ co-star, explained, “Usually the guy guides the scenes, helps you with positioning, helps you with your camera angles, but [with VR] I’m going from being used to being the passenger to being the driver.” It’s also incredibly physically taxing due to the guy’s lack of movement. “I’m going to be spending the next however many minutes doing squats,” she said before the shoot began. On a different shoot several weeks ago, performer Katrina Jade said of VR, “I don’t like it in the summer with all the work on me. I feel like I’m going to have a heatstroke and die.” But, as physically exhausting as it may be, a female star’s performance doesn’t hinge on a hard-to-fake physical sign of arousal.

What this all means for male talent depends entirely on just how much VR takes off. Of course, those who are investing hefty sums to develop multi-camera rigs and experiment with the possibilities of VR are convinced that it’s the next big thing. However, most in the industry are cautiously waiting to see how widely VR headsets are adopted and whether people really do want to watch porn this way. If the VR believers are right, though, it has implications for porn’s pool of male talent. “Guys are going to have to start being more non-visual,” said Love. Otherwise, she says, the talent pool is going to shrink. DeVille agrees. “It’s going to weed out the male talent like crazy,” she said. Shreddz, who sees VR as the future, has a simple message for his fellow male performers, “Better get used to it.”