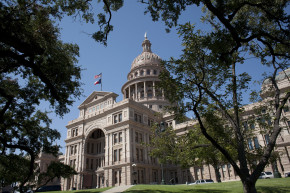 Texas Governor Greg Abbott vowed to cut funding to Austin’s new sheriff after she announced her county would scale back cooperation with federal immigration officials over deportations, marking a showdown over so-called sanctuary cities that may resonate beyond the Lone Star state.

Abbott, a Republican, has threatened to withhold nearly $1.8 million in state law-enforcement grants following Travis County Sheriff Sally Hernandez’s decision to buck state law and no longer honor all jail detainers sought by U.S. Immigration and Customs Enforcement. A detainer is a request to state and local jails to notify federal agents when they are about to release an undocumented immigrant from custody.

Beginning February 1, her office will only honor holds placed by federal agents when a suspect is booked into the Travis County Jail on charges of capital murder, aggravated sexual assault, and human trafficking.

“This is not a pronouncement of sound public policy; it is a dangerous game of political Russian roulette — with the lives of Texans at stake,” Abbott wrote in a letter to Hernandez on Monday. “Unless you reverse your policy… your unilateral decision will cost the people of Travis County money that was meant to be used to protect them.”

The governor’s warning echoes a promise repeatedly made by President Donald Trump as a candidate. During the campaign, the Republican nominee declared he would immediately strip federal funding from local governments that refuse to work with federal agents to arrest and detain undocumented immigrants living in the U.S. illegally. Thus far, Trump has yet to do so. House Republicans, however, have already drafted several bills aimed at defunding localities which resist or ban enforcement of federal immigration laws.

In response to the president’s pledge to banish up to three million people from America’s borders, dozens of liberal-leaning cities and counties have said they will refuse to aid federal law enforcement dispatched to deport them. Twelve of the largest American cities that call themselves immigrant sanctuaries to date — which include New York, Los Angeles, and Chicago — are home to nearly 20 percent of all undocumented immigrants in the U.S., a Vocativ analysis found. Around 76,000 undocumented immigrants live in Austin, according to census data analyzed by the Center for Migration Studies, a non-partisan think tank.

More ‘I Can’t Sleep’: Dreamers Worry Over Future Under Trump

Elected in November, Hernandez, a Democrat, had pledged to change how Travis County handle immigration detainers, which used to honor all requests made by federal immigration authorities. She announced her formal decision on Friday, the same day as Trump’s inauguration.

“The public must be confident that local law enforcement is focused on local public safety, not on federal immigration enforcement,” Hernandez said in a video announcement. “Our jail cannot be perceived as a holding tank for ICE or that Travis County deputies are ICE officers.”

The clash between Abbott and Hernandez appears to be the first between a state government and local jurisdiction over sanctuary policies. Abbott has previously threatened other cities deemed to be immigrant sanctuaries in the past, but stopped short of withholding funds.