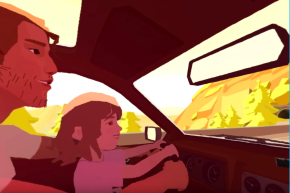 A small victory for the VR industry

The Academy Awards of Arts and Sciences announced the 2017 Oscar nominations on Tuesday morning and, aside from “La La Land” receiving 14 nominations and tying “Titanic” for the record, another impressive feat was achieved by the virtual reality film “Pearl.”

Google’s VR film “Pearl” is the first VR-compatible film to get the Oscar nod, for Best Animated Short Film. The movie received its nomination for the 2-D theatrical version, but the fact that it’s a compliment to its VR version makes it a small victory for the VR industry.

“It’s a story about the gifts we hand down and their power to carry love,” reads the film’s description. “And finding grace in the unlikeliest of places.”

“Pearl” follows the story of a girl and her dad as they travel the country chasing their dreams. The six-minute story is presented in 360-degrees and can be watched without a VR headset. It’s actually available on YouTube for free. Users just have to use their mouse curser to explore their surroundings and follow the characters.

A VR compatible film getting nominated for an Oscar is an interesting development and could get more filmmakers paying attention to the medium. “Pearl” is not the first VR film to be recognized at prestigious award ceremonies, though. Last year, Oculus Story Studio’s “Henry” received an Emmy.

More Augmented And Virtual Reality Might Be Everywhere In 2017

“Pearl” getting an Oscar nomination is also very similar to Chance the Rapper was nominated for several Grammy’s in 2016, even though he only streamed his album online and never released a physical copy. Art-sharing platforms are starting to change and established organizations such as the Academy are starting to acknowledge that art.

Google is competing with Pixar’s “Piper,” which was the short film released with “Finding Dory.” Piper is a bird that is curious about the ocean and perpetually fails to fight the current. She then befriends a hermit crab that teaches her how to avoid getting washed up to shore and see the wonders under the sea.