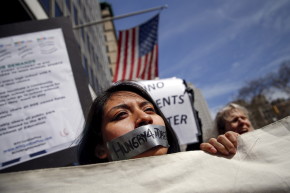 ‘I Can’t Sleep’: Dreamers Worry Over Future Under Trump
By Adi Cohen

‘I Can’t Sleep’: Dreamers Worry Over Future Under Trump

After vowing to end Obama's program for young immigrants, the Trump administration has wavered

As Donald Trump’s first Monday as president comes to an end, thousands of young immigrants are breathing a very cautious sigh of relief. The new president has taken no steps to end the Dreamer program — which gives temporary amnesty to immigrants who came to this country as children — despite months of promises to do so on the campaign trail.

In his first official press conference Monday, press secretary Sean Spicer was asked several times about the program, officially called Deferred Action For Childhood Arrivals, or DACA. Spicer didn’t explicitly say if Trump would end the program, but suggested it’s not a current priority. “We need to direct agencies to focus on those who are in this country illegally and have a record, a criminal record or pose a threat to the American people,” he said.

The anxiety felt by many Dreamers was palpable in recent days, as they waited to see how the new administration would act. Speculation ran rampant in various online groups, formed by Dreamers to help each other navigate the bureaucracy of the DACA application. “We have to have faith,” said one of the posts amid rumors about the future of DACA. Others urged the members to avoid panic. “We are all in this together and God will guide us!” another wrote.

DACA is a 2012 executive order signed by President Obama. It gave reprieve to around three-quarters of a million immigrants who were brought to this country illegally as young children, allowing them to defer deportation and apply for work visas. On his website, Donald Trump still promises to end the program “immediately.”

Is he going to repeal DACA? That’s a yes or no question, @seanspicer ! #daca

Good news for DACA students, but they did end with “for now.” 😒 https://t.co/fthS6UxrZK

However, even as it turned out that DACA was not one of the first batch of executive orders issued by the president on Monday, stress among participants still runs high.

“I’m personally anxious. Over the weekend I couldn’t sleep. Even knowing I have allies that would come to my defense, it affects me personally as well as my parents,” Jose Mendez, 24, a Dreamer and activist at “DreamActivist Ohio,” told Vocativ through Facebook chat. “We can’t live day by day not knowing the exact future for our undocumented brothers and sisters. We need our president to make it clear what he is going to do”.

For now it seems that the White House is maintaining the uncertainty about the future status of the order. On his third day in office, White House Chief of Staff Reince Priebus told Fox News Sunday that “we’re going to work with the House and Senate leadership, as well as to get a long-term solution on that issue.”

Some DACA holders find comfort in comments like this, hoping it is a sign that DACA status will not be revoked by a single executive order in the coming days. But Mendez, like others, is looking for a more explicit announcement. “We need him to clarify and not keep switching day by day,” he said.