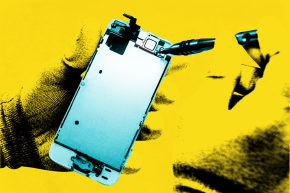 States Push To Give You The ‘Right To Repair’ Your iPhone

Third-party repair shops would no longer have to salvage parts

In several states, it could become easier to get a broken smartphone fixed, so you’ll be less tempted to just go out and drop hundreds on a new one unnecessarily.

New York, Massachusetts, Nebraska, Kansas, and Minnesota have all introduced bills to establish the “right to repair” electronics, which would force manufacturers such as Apple to sell proper replacement parts to both stores and consumers in order to make it easier for anyone to make proper repairs. In general, tech companies have made their repair parts hard to obtain and kept their diagnostic systems private as a way to maintain aftermarket monopolies. Apple customers today end up voiding their warranty when they turn to outside repair shops.

The bills aren’t exclusive to smartphones. Internet-connected gadgets, cameras, home appliances, and mostly anything else with software would fall under a right to repair. Companies manufacturing these electronics would also have to make their diagnostic and service manuals public. What good would a part be if you don’t know where it goes or what it does?

If passed, the right to repair would obviously be great news for consumers because it’d make it easier and possibly cheaper to get electronics fixed. However, it’s even greater news for shops that were illegitimately fixing these devices. They’ll no longer have to acquire salvaged parts form recycled electronics on the Chinese grey market. The repair industry organization, Repair.org, is lobbying for these laws.

Importantly, such legislation could also be a major environmental win. As the New York bill states, it would cutback on “electronic waste created by the inability to affordably repair broken electronics.”  It also noted: “Limited authorized channels result in inflated, high repair prices and high overturn of electronic items.”

Legislation in New York is on its third attempted at being passed. Last year, lobbyist groups backed up by Apple managed to kill the bill. That bill was modeled after the Motor Vehicle Owners’ Right To Repair Act, which was passed in Massachusetts in 2012 and eventually became national legislation. Lawmakers behind these bills only hope history repeats itself with the right to repair electronics.

Aside from the five states wanting to pass this legislation, Wyoming introduced a bill with similar language, except it only covers tractors and other farming electronics.