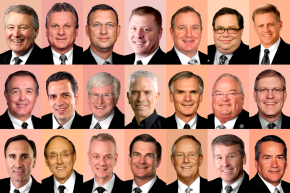 A new effort to restrict abortion rights to the point that they basically don’t exist (in spite of Roe v. Wade) is afoot in Congress. And it’s being led by 21 men and zero women.

H.R. 586, which was introduced last Tuesday, would put into law that “all human life shall be deemed to begin with fertilization” if passed. This appears to be similar to “life begins at conception” bills that have been introduced to the House and Senate over the last few years. Those, as written, would grant civil rights to fetuses, which could then be used to overturn Roe v. Wade., a landmark Supreme Court case that ruled unconstitutional a state law that banned abortions.

The previous bills didn’t get anywhere, but a newly emboldened Republican Congress with a Republican president is determined to try again. This would, obviously, have the most significant impact on the people who are pregnant with these fetuses. Strangely, the gender most affected by this bill cannot be found in any of its sponsors.

Aside from all being men, the 21 representatives have something else in common: They are all Republicans.

While this bill faces a long and winding road through the legislative branch to become law (and then, inevitably, a Supreme Court challenge should that happen), President Trump has already moved to make abortion that much more difficult for women elsewhere in the world to obtain (along with other health and family planning services): on Monday, he signed an executive order barring any federal funding from going to international women’s health organizations if they offer abortions. Trump was surrounded by men when he signed the order.