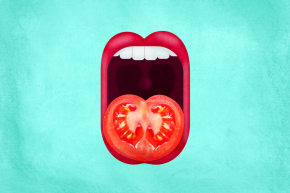 The Quest To Revive The Flavor Of Bland, Terrible Tomatoes
By Alexandra Ossola

The Quest To Revive The Flavor Of Bland, Terrible Tomatoes

Once upon a time, tomatoes were much tastier than the bland, watery fruits they are now. Breeders were concerned with higher yield, more disease resistant, and firmer plants that were easier to ship and store. In the process, the genes that gave tomatoes flavor disappeared. Now a team of researchers is bringing tasty back by investigating the genes of the tomato that determine its flavor.

The flavor of any food is shaped by what you taste and what you smell. In tomatoes, chemicals such as sugars, acids, and volatile compounds affect the flavor we perceive. Researchers have paid a lot of attention to volatiles in particular — there are hundreds of them, but only 15 or 20 are thought to play a role in flavor (that’s also why you’re not supposed to put tomatoes in the refrigerator, because their volatiles break down). Past studies have identified the few genes that change how the tomato synthesizes these compounds.

More Why We’re (Still) So Paranoid About GMOs

In the study, published Thursday in the journal Science, researchers sequenced the genomes of nearly 400 varieties of “modern, heirloom, and wild accessions of the tomato.” To get a sense of which compounds made for more delicious tomatoes, the researchers fed 160 samples to people on a consumer panel, who surely never wanted to look at another tomato again by the end of it.

From their responses about which tomatoes tasted the best, the researchers identified 33 chemicals that made the consumers like the tomatoes more. By then comparing the genomes of contemporary varieties of tomatoes and older types, they identified which genes were associated with the chemicals that created best flavor. Breeders can make tomatoes more flavorful by including some of these genes in future varieties.

There may be other reasons besides genes that make modern tomatoes taste worse. Other recent studies have shown that the common agricultural practice of refrigerating tomatoes immediately after they are picked, before they are fully ripe, can make them lose flavor. The researchers don’t deny that this might be influencing how tomatoes taste on your plate, but note that “making improvements in flavor-associated chemicals is the first step to restoring the potential of widely grown commercial varieties.”

The trick is balancing consumer preferences. Adding these flavor-enhancing genes back into tomatoes could make them smaller or more prone to bruising. But grocery shoppers might also be willing to buy a smaller tomato if it’s going to taste better. Tomato farmers will have to weigh the pros and cons of these kinds of tomatoes should breeders decide to develop them in the future.