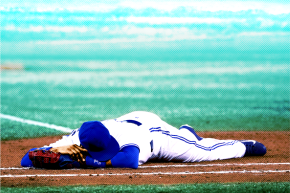 Cramming 162 games into barely more than six months, Major League Baseball has a solid claim as the most grueling schedule in all sports. What makes the sport in the United States particularly brutal is that teams routinely travel thousands of miles and across multiple time zones to make the next day’s game. And not only does it appear jet lag is a real problem for ballplayers, but it’s actually possible to say what precise part of the game is most affected.

We often think of jet lag more in terms of long-haul flights to other continents, but a traveler needs only to travel across two time zones for jet lag to throw off his internal clock. Previous studies had found evidence to suggest jet lag did hurt a team’s chances of winning, but these had only looked at big-picture effects. A new effort from Northwestern University researchers found jet lag may be causing pitchers to give up more home runs.

That makes sense given that nothing in baseball requires superhuman accuracy more than pitching. As one of our finest sports scribes once described it, “A pitcher has to hurl a ball 90+ mph over and over again into an imaginary box that measures about 500 square inches, and if he spots the ball in about 450 of those square inches it will be launched into outer space.” If jet lag is going to affect any part of the game, it would be a pitcher’s skills.

With just eight of baseball’s 30 teams in the Mountain or Pacific time zones, jet lag doesn’t matter for most road trips. The researchers only looked at about a tenth of the nearly 50,000 games played between 1992 and 2011, at times when jet lag came into play for one team.

More The Cavs Beat The Warriors And Science

They found jet lag generally only mattered when traveling from west to east, which isn’t a surprise. Our circadian clocks are naturally a little longer than 24 hours, so travelers naturally cope better with westward trips that lengthen the day than eastward trips that shorten it.

Jet lag hurt home teams returning from a western road trip more than it did the away teams, because the long flight almost completely canceled out a team’s natural home-field advantage. The researchers suggest this could be because away teams have more tightly structured schedules than teams at home, which puts more burden on the home players to individually figure out how to deal with jet lag they might not even consciously notice.

All this does suggest some potential workarounds, including home teams treating the first game back after a long flight like they would an away game. The researchers also suggest the pitcher scheduled to start the first game after a flight be sent there a few days early (some teams already do this). The difference might be subtle, but it could decide between a playoff spot and an early vacation.

Given many teams’ focus on statistics and analytics, precisely planning travel schedules around jet lag sounds like an easy win.