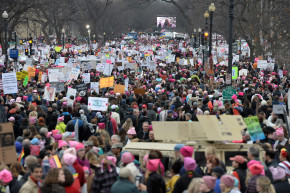 Can A Grassroots Army Take Back The House?
By Shane Dixon Kavanaugh

Can A Grassroots Army Take Back The House?

More than 100,000 liberals have flocked to Swing Left, a citizen-led network, in the last week. Their goal? Trounce the GOP in the midterm elections

The marchers are making their next moves — online.

Energized by nationwide demonstrations in opposition to Donald Trump’s presidency, liberals are now flocking — en masse — to a digital network designed to generate early support for congressional swing districts up for grabs in 2018.

More than 100,000 people have signed up on Swing Left since it launched last week with the aim of helping Democrats recapture the House during the midterm elections, the nascent platform announced. Founded by a group that claims to have no prior political experience, the grassroots initiative is one of dozens focused on helping the left remain active and organized as the Trump administration and a Republican-controlled Congress move to implement an aggressively conservative agenda. It could be an especially effective tool for those living in liberal safe-havens who are uncertain how to direct their time and resources.

In just 4 days, 100,000 people have signed up to support their closest swing district at https://t.co/dXBdbNv9Lj. Our work begins NOW.

Here’s how it works. By entering a location, Swing Left helps progressives identify competitive House seats nearest to them. A Hillary Clinton supporter on Manhattan’s Upper West Side, for example, will discover those to be New Jersey’s Seventh and Fifth Congressional Districts, where Republican Leonard Lance won by only 37,622 votes, or a 11 percent margin, and Democrat Josh Gottheimer narrowly scored a victory by 14,897 votes, or 4.4 percent, respectively.

As for a Bernie Bro in Portland, Oregon? That would be Republican Jeff Denham’s central California district, some 655 miles away. In November, Denham won his seat by just 8,201 votes, or 3.4 percent.

Swing Left users can then sign up to receive updates, action alerts, and opportunities to network with other liberals who are focused on a particular district. While the midterm elections are nearly two years away, those behind the platform do not plan to waste any time. “Don’t despair. Mobilize,” reads a message published on Swing Left’s website. “We can stop Trump and the GOP agenda by working together NOW.”

The site lists its creators as Ethan Todras-Whitehill, a writer and teacher in New York; Joshua Krafchin, an entrepreneur from the San Francisco area, and; Miriam Stone, a brand strategist also from the Bay Area. Swing Left claims to have no formal affiliation with a political party or organization, and instead identifies its members as a “loosely connected group of individuals from diverse industries, including tech, media, nonprofits, and art, who came together in the wake of the Trump election.” They did not immediately respond to multiple interview requests by Vocativ.

Still, flipping the House will be an uphill battle. There are some 52 congressional districts that were won or lost by 15 percent of the vote of less in November’s elections, the threshold used by Swing Left to identify competitive races. Of those, Republicans currently occupy 35 of them. Democrats would need to pick up 24 of the GOP’s seats while holding on to all 17 of theirs in order to recapture the House in 2018. Such prospects face an even greater challenge because of the Republican Party’s overwhelming success with redistricting House seats following the 2010 census.

That has not discouraged an early groundswell of support for Swing Left, thanks, in part, to some high-profile endorsements. Among them: Jon Favreau, a former speech writer for Barack Obama, comedian Sarah Silverman, and others.

We mentioned @swingleftorg on the show today: find your nearest swing district and help turn it blue in 2018. https://t.co/6iJZ6pWqC2